High-Level Conference - Applying the Council of Europe Istanbul Convention: what does it mean in practice? 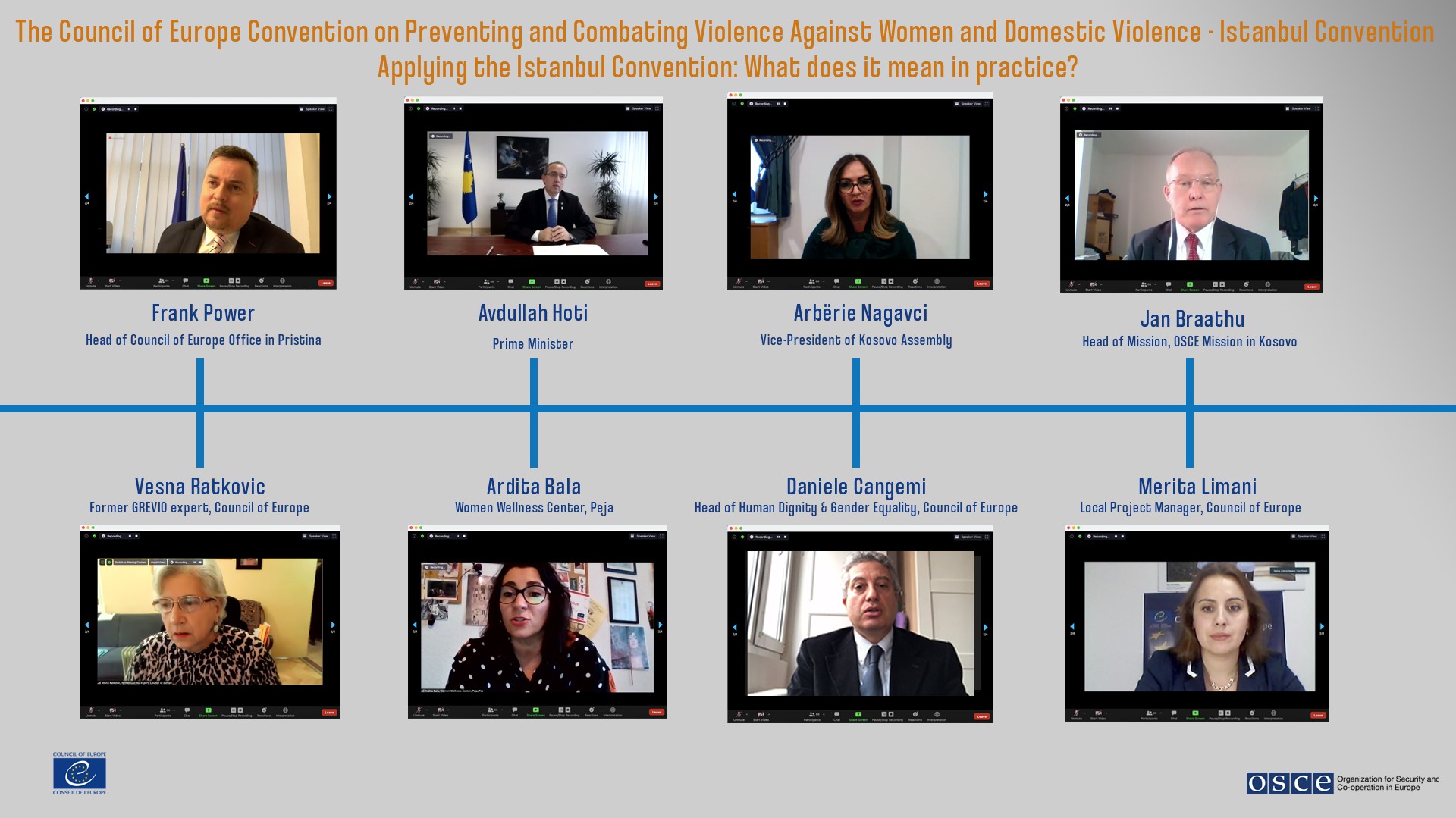 On 9 December 2020, the Council of Europe Office in Pristina and OSCE Mission in Kosovo* organised an online High-Level Conference with the aims to enhance the local knowledge on the steps needed to implement of the Istanbul Convention in Kosovo*.

The conference was attended by over 80 participants representing institutions, authorities, local and international organizations active in combating of violence against women and domestic violence.

The conference was opened by Frank Power, Head of Council of Europe Office in Pristina and Ambassador Jan Braathu, Head of OSCE Mission in Kosovo. The keynote remarks were offered by Prime-minister Avdullah Hoti, from Deputy Speaker of Parliament Arberie Nagavci, and Ardita Bala, director of Women Wellness Center in Peja/Peć.

The panel discussion on the steps to implementation of the Council of Europe Istanbul Convention featured presentations from Daniele Cangemi, Head of Human Dignity and Gender Equality Department of the Council of Europe, Vesna Ratkovic, a former GREVIO member to Council of Europe and Merita Limani, local Project Manager, Council of Europe. On the domestic frameworks and application of Istanbul Convention, presentations were delivered by Vlora Limani Hajnuni, Chair Women’s Caucus Parliament and Edi Gusia, Head, Agency for Gender Equality. A panel on local support services for victims of violence against women and domestic violence was addressed by Biljana Nastovska and Valentina Bejtullahu Turjaka of OSCE Mission in Kosovo, Marta Becerra, Head of Capacity-building and co-operation projects unit, Basri Kastrati, Victims Protection and Assistance Office and Tijana Simić, NGO Žensko Pravo.

The conference was organised under the project "Reinforcing the fight against violence against women and domestic violence in Kosovo*-Phase II", which is funded by the government of Norway.

* "All reference to Kosovo, whether the territory, institutions or population, in this text shall be understood in full compliance with United Nation’s Security Council Resolution 1244 and without prejudice to the status of Kosovo."