Round table on codes of conduct in higher education 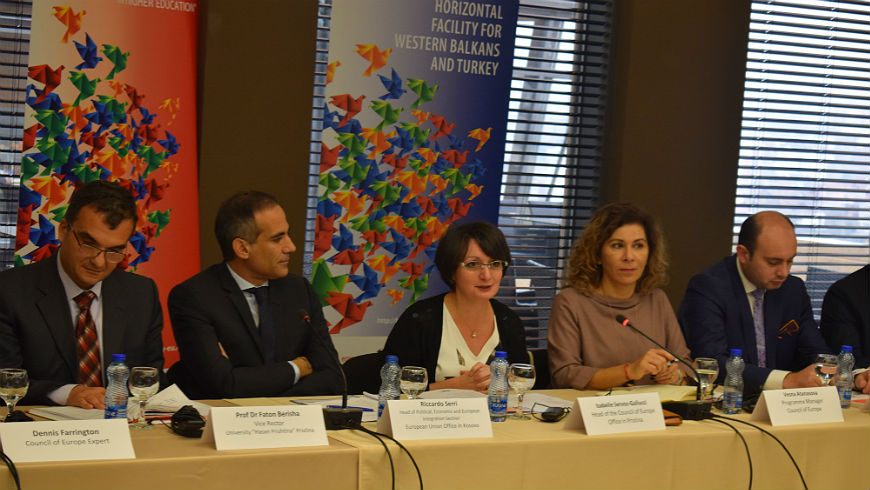 Speakers at the opening session included: Ms Isabelle Servoz – Gallucci – Head of the Council of Europe office in Pristina, Mr Arber Gecaj – Deputy Minister of Education, Science and Technology, Mr Riccardo Serri, Head of the Political, Economic and Integration Section from the European Union Office in Kosovo, Mr Faton Berisha, Vice-Rector of the University of Pristina and Ms Vesna Atanasova, Programme Manager at the Education Department, Council of Europe. Keynote speeches were presented by Professor Dennis Farrington a prominent United Kingdom legal expert who presented the draft codes of conduct in Higher Education for three categories: students, academic staff and upper management of Higher education institutions, as well as by Professor Shaban Buza, Rector of the University of Gjakova “Fehmi Agani” who spoke about the impact that the codes will have on the daily work of the University.

The round table was followed by an open discussion among the participants. It provided an excellent opportunity for a fruitful exchange of views on how to adopt the codes and adapt them to specific circumstances within each University.

“Strengthen Integrity and Combat Corruption in the Higher Education”

The Council of Europe assists relevant authorities in Kosovo* to improve the quality of education through applying preventive mechanisms based on Council of Europe standards and practices. The action is being implemented in partnership with the Ministry of Education, Science and Technology while involving a wider group of relevant stakeholders, including public universities, the Anti-Corruption Agency, the Accreditation Agency, education policy and research institutes, NGOs and academics.

The overall objective is to strengthen integrity and combat corruption in the higher education system in Kosovo through applying preventive mechanisms based on Council of Europe standards and policies.

The first specific objective is to support relevant higher education institutions in developing ethical standards, combat corruption and promote best practices of quality and integrity in education. This specific objective shall be accomplished through the achievement of the following results:

The second specific objective is to raise awareness and improve knowledge of the main education actors on ethical standards and how to address corruption. This objective shall be accomplished through the achievement of the following result:

* This designation is without prejudice to positions on status, and is in line with UNSCR 1244 and the ICJ opinion on the Kosovo Declaration of Independence.

Baseline assessment of integrity in higher education in Kosovo*