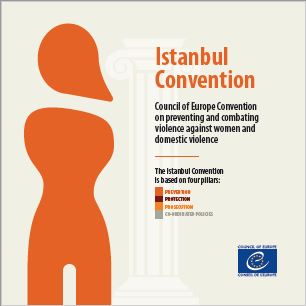 1.         This aide-memoire contains a legal analysis seeking to clarify obligations arising from the ratification of the “Council of Europe Convention on preventing and combating violence against women and domestic violence” (CETS 210, 2011 - hereinafter “Istanbul Convention” or “Convention”), in particular as regards the legal recognition of a ‘third gender’ and same-sex marriages.

2.         At the outset, it should be emphasised that the interpretation of an international treaty is primarily the responsibility of the parties and treaty bodies. The present analysis intends to provide advice and guidance as part of the legal assistance tasks of the Directorate of Legal Advice and Public International Law (DLAPIL) in relation to a Council of Europe instrument.

3.         The analysis first outlines the purpose of the Convention and obligations deriving from its ratification (1.). As to its central meaning to the Convention, the analysis draws on the meaning of the term ‘gender’ (2.). The analysis then focuses on the questions whether the Istanbul Convention implies a legal obligation to recognise a third sex (sometimes although misleadingly referred to as ‘third gender’) (3.) and to allow same-sex marriages (4.).

1. Purposes of the Convention and obligations deriving from its ratification

“Article 1 – Purposes of the Convention

a) protect women against all forms of violence, and prevent, prosecute and eliminate violence against women and domestic violence;

b) contribute to the elimination of all forms of discrimination against women and promote substantive equality between women and men, including by empowering women;

c) design a comprehensive framework, policies and measures for the protection of and assistance to all victims of violence against women and domestic violence;

d) promote international co-operation with a view to eliminating violence against women and domestic violence;

e) provide support and assistance to organisations and law enforcement agencies to effectively co-operate in order to adopt an integrated approach to eliminating violence against women and domestic violence.

2)         In order to ensure effective implementation of its provisions by the Parties, this Convention establishes a specific monitoring mechanism.”

5.         From a substantive point of view, the Convention contains both human rights and criminal law provisions. It requires state parties to criminalise several conducts which amount to violence against women and domestic violence. The conducts encompass forced marriage, female genital mutilation, forced abortion, stalking, sexual harassment, physical and psychological violence and sexual violence. Offences established in the Convention must be punishable by effective, proportionate and dissuasive sanctions (Article 45), taking into account their seriousness and aggravating circumstances.

6.         As for preventive and protective measures, States must “take the necessary measures to promote changes in the social and cultural patterns of behaviour of women and men with a view to eradicating customs, traditions and all other practices which are based on the idea of the inferiority of women or on stereotyped roles for women and men” (Article 12 (1) of the Convention), and provide support services for victims of violence, including legal and psychological counselling, financial assistance, housing, education, training and assistance in finding employment (Article 20), specialist support services (Article 22), shelters (Article 23), and telephone helplines (Article 24). In order to implement the obligations set out the Convention, States must allocate “appropriate financial and human resources” (Article 8).

2. The use of the term ‘gender’ and its consequences for domestic implementation of the Convention

7.         The Convention is based on the premise that violence against women cannot be eradicated without investing in equality among women and men. As the Explanatory report explains, “research has shown that certain [gender] roles or stereotypes reproduce unwanted and harmful practices and contribute to make violence against women acceptable” (paragraph 43). Only effective gender equality and a change in attitudes can truly prevent such violence.

8.         ‘Gender’ is thus a central term used throughout the Istanbul Convention. According to Article 3 subparagraph (c) of the Convention the term gender, based on the two sexes, male and female, means “the socially constructed roles, behaviours, activities and attributes that a given society considers appropriate for women and men”.[1] The Istanbul Convention considers the definitions of ‘gender’ and ‘sex’ as two different, separate concepts, as confirmed both by the non-discrimination principle set out in Article 4 (3) of the Convention and the Convention’s explanatory report which emphasizes in paragraph 43 that the “term ‘gender’ under this definition is not intended as a replacement for the terms ‘women’ and ‘men’ used in the Convention.”

9.         Having in mind the correlation between gender inequality and gender stereotypes on the one hand, and the frequent occurrence of violence against women on the other hand, Article 6 of the Convention requires parties “to include a gender perspective in the implementation and evaluation of the impact of the provisions of this Convention and to promote and effectively implement policies of equality between women and men and the empowerment of women.” Along these lines, Article 12 (1) of the Convention requires parties to take the necessary measures to eradicate harmful prejudice, customs, traditions and other practices which are based on the idea that women are inferior to male or on harmful gender stereotypes.[2] For example, Article 14 (1) of the Convention requires from states to include teaching material on non-stereotyped gender roles in formal curricula. This provision aims at empowering girls and boys, from an early age, to pursue life options and relationships that are not limited to traditional roles for men (for example as breadwinners) and women (as mothers and carers). However, in view of the above mentioned definition of ‘gender’, this obligation does not imply that member states have to include in formal curricula teaching material specifically on homosexuality and/or transgender.

10.       In the same vein, it should be noted that the Convention does not oblige state parties to recognise the status of refugee for transgender or intersex persons under Article 1 of the 1951 Convention relating to the Status of Refugees (Refugee Convention). According to Article 60 (2) of the Istanbul Convention, state parties must “ensure that a gender-sensitive interpretation is given to each of the [Refugee] Convention grounds and that where it is established that the persecution feared is for one or more of these grounds, applicants shall be granted refugee status according to the applicable relevant instruments.” As the explanatory report clarifies in paragraph 312,

“[t]he obligation contained in this provision is two-fold. On the one hand, it requires Parties to ensure that a gender-sensitive interpretation is given to each of the 1951 Convention grounds. The well-founded fear of persecution must be related to one or more of the 1951 Convention grounds. In the examination of the grounds for persecution, gender-based violence is often seen to fall within the ground of “membership of a particular social group”, overlooking the other grounds. Ensuring a gender-sensitive interpretation implies recognising and understanding how gender can have an impact on the reasons behind the type of persecution or harm suffered. On the other hand, paragraph 2 requires Parties to allow for the possibility of granting refugee status should it be established that the persecution feared is for one of these grounds. It is important to note that adopting a gender-sensitive interpretation does not mean that all women will automatically be entitled to refugee status. What amounts to a well-founded fear of persecution will depend on the particular circumstances of each individual case. It is particularly important to note that the refugee status should be granted “according to the applicable relevant instruments”, that is to say, under the conditions expressly provided by these instruments, such as, for instance, by Article 1 of the 1951 Convention.”

11.       It follows that it was nowhere the intention of the drafters to establish a new refugee status for transgender or intersex persons. Rather, with a view to overcoming “gender blindness in the establishment of refugee status and of international protection”,[3] the Istanbul Convention requires parties to introduce a gender-perspective into the examination of asylum requests in particular by women.

12.       To conclude, the Convention calls on state parties to apply a gender-perspective when complying with their obligation to take measures protecting and supporting victims of violence against women and domestic violence. The precise scope of measures taken remains within the margin of appreciation of state parties.

3. No obligation under the Istanbul Convention to provide legal recognition of a third sex under domestic law

13.       The term third sex (sometimes also referred to as third gender or intersex or divers) refers to a category of people who do not identify as male or female. A transgender is a person whose gender identity does not correspond to that person’s biological sex assigned at birth. Transgender people are sometimes called transsexual if they desire medical assistance to transition from one sex to another.

14.       The Convention mentions these terms neither explicitly, nor does it contain any substantive or procedural obligations regarding the legal status of third sex, transgender or transsexual persons. It does not require from state parties to attribute a particular legal status to intersex and transgender persons.

15.       This follows both from the general scope and purposes of the Convention and the specific provisions mentioning ‘gender’ that the parties are merely required to avoid, within the Convention’s scope of application, any discrimination on the grounds of gender or sexual identity. According to Article 4 (3) of the Convention, the implementation of the provisions of the Convention by the parties, in particular measures to protect the rights of victims, “shall be secured without discrimination on any ground such as sex, gender, race, colour, language, religion, political or other opinion, national or social origin, association with a national minority, property, birth, sexual orientation, gender identity, age, state of health, disability, marital status, migrant or refugee status, or other status.”

16.       Within this context only, the explanatory report refers to “transgender or transsexual persons”, stating that “certain groups of individuals may also experience discrimination on the basis of their gender identity, which in simple terms means that the gender they identify with is not in conformity with the sex assigned to them at birth. This includes categories of individuals such as transgender or transsexual persons, cross-dressers, transvestites and other groups of persons that do not correspond to what society has established as belonging to ‘male’ or ‘female’ categories (paragraph. 53 in fine; see also paragraphs 87 and 313 of the explanatory report).

4. No obligation under the Istanbul Convention to allow same-sex marriage

17.       As with the recognition of a third sex, no reference is made to the legal recognition of same-sex marriage, a subject which is not encompassed by the scope of the Convention. Within this context, it should be noted that in its recent judgment Orlandi and Others v Italy the ECtHR noted a movement towards legal recognition that has continued to develop rapidly in Europe and beyond.[4] However, the Court stressed at the same time that a national legislator remained free under the ECHR not to allow same‑sex marriages (“a choice not condemnable under the Convention”). The Court acknowledged “that there is also a State’s legitimate interest in ensuring that its legislative prerogatives are respected and therefore that the choices of democratically elected governments do not go circumvented.”[5]

18.       In conclusion, the Istanbul Convention calls for a gendered understanding of violence against women and domestic violence as a basis for all measures to protect and support victims. However, any positive measures in this respect are clearly circumscribed by the Convention’s scope and purposes. In particular, the Istanbul Convention does not imply the obligation to legally recognise a third sex or to provide legal recognition of same-sex marriages.

[1] See also the CEDAW Committee’s understanding of ‘gender’. Accordingly, the “term gender refers to socially constructed identities, attributes and roles for women and men and society’s social and cultural meaning for these biological differences resulting in hierarchical relationships between women and men and in the distribution of power and rights favouring men and disadvantaging women. This social positioning of women and men is affected by political, economic, cultural, social, religious, ideological and environmental factors and can be changed by culture, society and community” (para. 5).

[4] Judgment of 14 December 2017. At the time of the delivery of the judgment (December 2017), 27 countries out of the 47 Council of Europe member states had enacted legislation permitting same‑sex couples to have their relationship recognised (either as a marriage or as a form of civil union or registered partnership), see § 204 of the judgment.