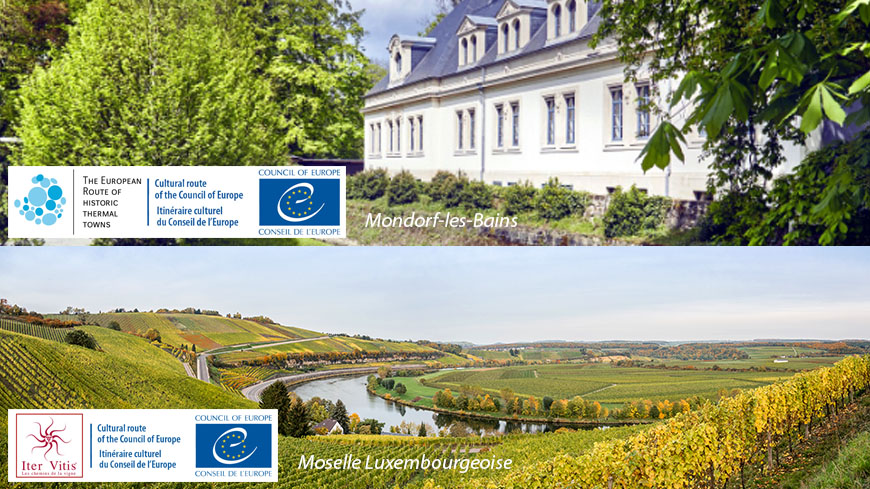 The Luxembourg Moselle Region, from Schengen to Wasserbillig, is the cradle of great Luxembourg wines combining picturesque villages and cultural vestiges, surrounded by endless vineyards in a unique cultural and river landscape.

Mondorf-les-Bains is a renowned European thermal destination, with its thermal springs used for therapeutic purposes since the middle of the 19th century. After the establishment of the first domaine thermal inaugurated in 1847, the town of Mondorf soon prospered as many Europeans came to stay in its wonderful resort and hotels just across the border. Today, its spa welcomes thousands of visitors each year with its richly mineralized waters, and is one of the most modern facilities of its kind in Europe.

Luxembourg is crossed by 7 of the 38 Cultural Routes of the Council of Europe: Saint Martin of Tours Route, Iter Vitis Route, European Route of Historic Thermal Towns, Fortified Towns of the Greater Region, Via Charlemagne, European Route of Industrial Heritage and Liberation Route Europe.

Mrs Barbara ZECHES, Counsellor for International and European Affairs, is the Representative of the Ministry of Culture to the EPA Governing Board for Luxembourg. She is Vice-President of the European Institute of Cultural Routes, Luxembourg.