Corruption remains a serious challenge for Kosovo*. According to a number of surveys conducted by national and international organizations, control of corruption has proved to be scarce. In the field of money laundering and terrorism financing, recent assessments have also shown that there is a need for continuous legislative and organizational reforms to bring Kosovo* in line with European and international standards. While reforms related to corruption and money laundering have been underway for several years, there has been no structured, longer-term process to assess the progress and impact achieved up to date and highlight short-medium and long term reform steps. In view of this and while acknowledging the need of a structured and unified assessment process in Kosovo* and in these areas (Anti-corruption and Anti-Money Laundering and Countering of Terrorist Financing based on international/regional standards and practices as well as the successful experience of previous interventions of the Council of Europe carried out in Kosovo*, a project to address actions as such was designed in cooperation with counterpart institutions in Kosovo* and European Union Office in Pristina.

As a results an IPA 2012’ Contribution Agreement as a Joint Programme was signed in January 2012 between the Council of Europe and the European Union Office in Pristina. The PECK Project started on 1 February 2012, with a duration of 30 months and a budget of 1,200.000 Euro (EU funds: 83.3% and CoE funds: 16.7%). The Project’s overall objective is to contribute to the democracy and the rule of law through the prevention and control of corruption; money laundering; and the financing of terrorism in Kosovo*. The Project’s purpose is to strengthen institutional capacities to counter corruption; money laundering; and the financing of terrorism in Kosovo* in accordance with European standards through assessments and recommendations for improving and streamlining reforms to combat economic crime. The Office of Good Governance (OGG), the Kosovo* Anti-Corruption Agency (KAA), and the Financial Intelligence Centre (FIC), are the main counterpart institutions for this Project. 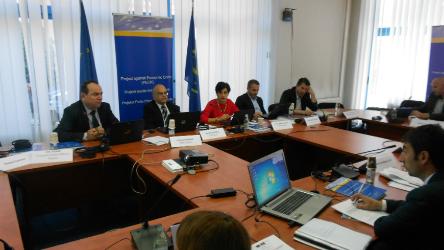 The PECK Project continued to support the revision of the AML/CFT Law of Kosovo in line with relevant international standards. Following the PECK experts’ recent mission and discussions (Pristina, 25-27 March 2015) held with the main stakeholders and members of the Working Group set up by the...

The European Union (EU) and the Council of Europe (CoE) Joint Project against Economic Crime in Kosovo* (PECK) held its Closing Conference on 28 April 2015 in Pristina. The Project, co-funded by the EU and CoE and implemented by the CoE, aims to strengthen the capacities of Kosovo* institutions...

PECK Project is assisting Kosovo* authorities with comprehensive revision of the AML/CFT Law in order to improve its compliance with applicable European and international standards. This activity builds on the results and findings of the recent PECK assessment report and will also contribute to...