Legislation on protection of whistleblowers enters into force in Kosovo* 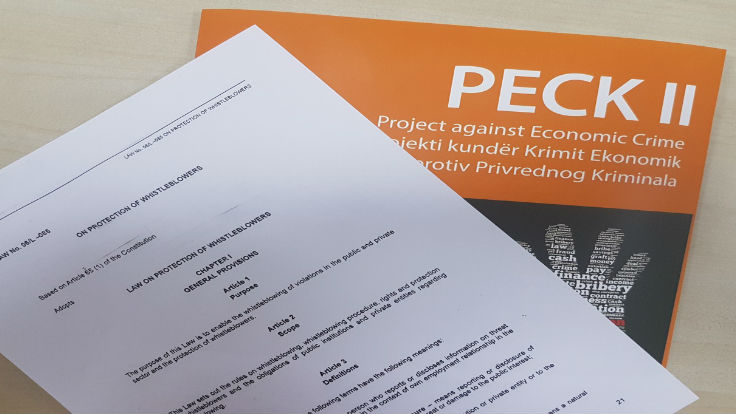 The Council of Europe continues to provide substantive support to Kosovo* institutions in drafting legislation in the area of anti-corruption and anti-money laundering/ financing of terrorism. Recently, Kosovo* has enacted the new Law on Protection of Whistleblowers which constitutes a direct outcome of the Project against Economic Crime (PECK II). The Law is already seen as the most advanced Law in the region largely complying with European standards in the area of whistleblowing.

Comparing to the previous rules, the new Law expands the framework of whistleblowers protection to cover both the public and the private sector. It includes a three-tier approach as envisaged by the Council of Europe standards and offers clear procedures for protection of whistleblowers. Moreover, the Law foresees dissuasive sanctions for public and private institutions failing to comply with provisions of the Law.

Presenting the draft Law in front of the Government of Kosovo* Minister of Justice had stated “The articles of the draft law are harmonized with the best practices and standards in Europe…and it is also very important in the fight against corruption and organised crime”.

Ardian Bajraktari, Director of the Legal Department at the Ministry of Justice, on support provided by PECK II project: “We thank the Joint EU/Council of Europe Project against Economic Crime (PECK II) for the support in drafting the Law and aligning it with European and International standards. This Law enriches the legal framework on prevention and fighting corruption and other abuse in public institutions and private sector’’

In the area of anti-money laundering and combating financing of terrorism, the Project against Economic crime (PECK II) has supported the Financial Intelligence Unit with drafting of the Administrative Instruction on Politically Exposed Persons which is now in force and published at the FIU-K official web page. The aim of this sub legal act is to guide reporting entities on effective management of money laundering risks by Politically Exposed Persons.

"The Support of PECK II Project amongst others in drafting this Instruction is invaluable to our efforts to enhance the legal framework in combating AML/CFT. This Administrative Instruction aims to set up measures to be undertaken in respect to applying enhanced due diligence as well as continuous monitoring of business relationship with politically exposed persons. Moreover, it is in line with (EU) 2015/849 of 20 May 2015 on the prevention of the use of the financial system for the purposes of money laundering or terrorist financing’"
Behar Xhema, Deputy Director of Financial Intelligence Unit, on support provided by PECK II Project