Schools are ‘the foundation on which we build inclusive societies’, says Council of Europe Secretary General 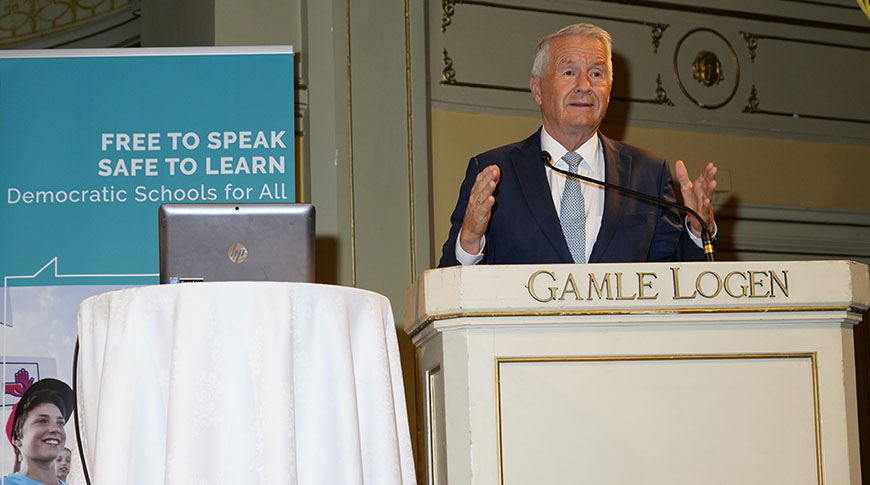 The new Council of Europe education campaign – Free to Speak, Safe to Learn – Democratic Schools for All – has been enthusiastically launched in Oslo, in the presence of the Norwegian Prime Minister, education ministers, the Secretary General of the Council of Europe, education experts, teachers and pupils.

Speaking at the launch today, the Council of Europe’s Secretary General, Thorbjørn Jagland, said the campaign would put schools in the forefront of tackling the ‘dark’ issues facing Europe today: the undermining of democratic institutions, extreme populism and nationalism and the targeting of migrants. ‘I have always believed that the first place to tackle these phenomena is through education, schools. This is the foundation on which we build inclusive societies.’

The Organisation’s Director General of Democracy, Snežana Samardžić-Marković, said: ‘Schools must be places which provide a “safe space” for children to learn and practice their democratic competences, to help them find, not just a job, but also a meaningful role in life... Safety is more than just the absence of physical danger. There is safety in democracy.’

Speech of The Secretary General of the Council of Europe Thorbjørn Jagland on the occasion of the 10th anniversary of the Wergelang centre and the launch of the Campaign: Free to Speak, Safe to Learn – Democratic Schools for All

Speech of Snežana Samardžić-Marković, Director General of Democracy on the occasion of the launch of the Campaign: Free to Speak, Safe to Learn – Democratic Schools for All

Council of Europe Working Conference “Competences in action”. Reference Framework of Competences for Democratic Culture: moving towards a competence-based approach to teaching and learning
Florence - 14 & 15 November 2019

For upcoming events check our calendar
of events