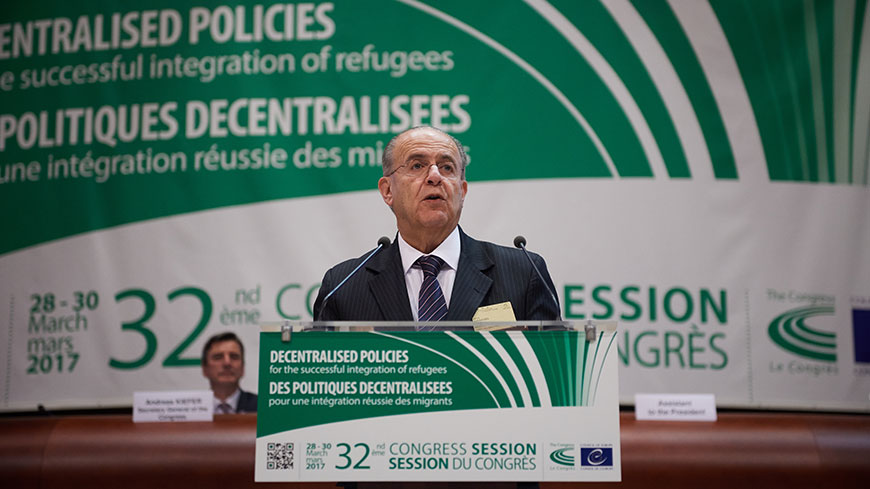 “Both your programmes and ours are aimed at promoting the Council of Europe’s values, bolstering inter-institutional co-operation and enhancning relations with our neighbouring countries” said Ioannis Kasoulides, Chair of the Committee of Ministers of the Council of Europe and Cypriot Minister for Foreign Affairs, when addressing the members of the Congress on 29 March 2017.

Cyprus was currently planning to reform its local government arrangements and he referred to the recommendation on local democracy in Cyprus, adopted by the Congress in October 2016. He also drew attention to the numerous areas in which both the Cypriot authorities and the Congress were working, in particular to prevent radicalisation, integrate refugees and migrants, and take action against Anti-Gypsyism.

“The Congress” priority, which is to improve the quality of local and regional democracy, in particular by raising awareness of human rights at local and regional level and by promoting ethical conduct and transparency, is particularly important and necessary”, he said.

He also mentioned the crisis in Turkey following the failed coup d’Etat in July 2016 and said that it was the Cypriot Chairmanship’s aim “to assist the Turkish authorities to overcome the difficulties the country is facing, while ensuring compliance with our common standards with regard to human rights, democracy and the rule of law”. A debate on the detention of elected mayors and their replacement by persons designated by the government is on the agenda of the 32nd Session, following a fact-finding visit to Turkey in 2016.