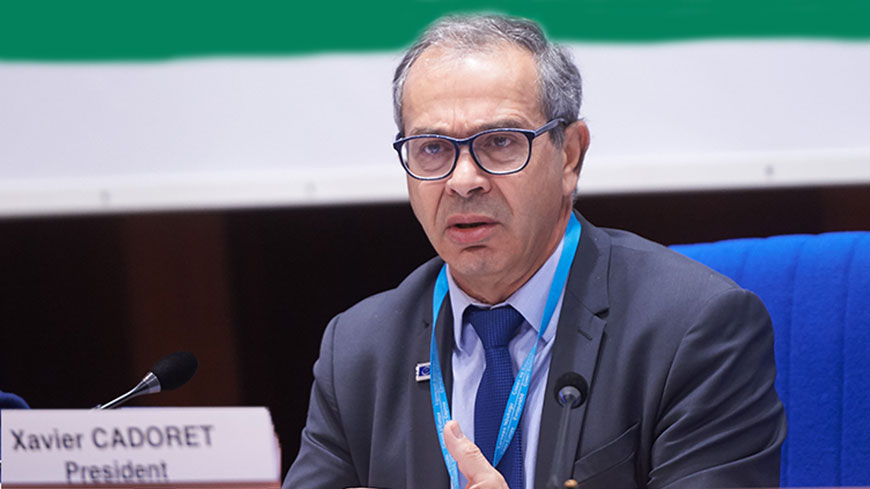 "Gender equality and women's participation are essential conditions for any democratic, just and peaceful society," stated Xavier Cadoret, Vice-President of the Congress and Rapporteur of the South-Med Partnership, at the opening of the online seminar on supporting newly elected women in Moroccan territorial councils.

Organised from 10 to 12 December 2021 by the Congress in co-operation with the International Organisation of the Francophonie (OIF) and in partnership with the Moroccan Women's Democratic Association (ADFM), associations of local and regional authorities and the Moroccan Ministry of the Interior, this seminar is part of the continuity of the local, regional and provincial elections held in Morocco in September 2021 and observed by a Congress delegation. It aims to strengthen the theoretical knowledge of newly elected women through exchanges of experience with their counterparts from Tunisia, including the Mayor of Tunis Souad Abderrahim, and their European counterparts, including Congress members Karl-Heinz Lambertz (Belgium, SOC/V/DP) and Zohra Darras (France, SOC/V/DP), as well as Simone Susskind, founder of the association Actions in the Mediterranean.

"Conducting tasks as a local elected representative is a real daily challenge", underlined Xavier Cadoret, insisting on the importance training of elected representatives. Support and continuous training for elected women is one of many levers identified to improve women's participation. Others are training on the role of political parties in facilitating their access to the political scene and networking between elected women – particularly via women's associations and networks at national level and beyond. Among the topics discussed were the current challenges of territorial development, the role of elected women in territorial development, the principles of decentralised governance, open government, and the tools for implementing participatory democracy as well as incorporating a gender approach at the regional, provincial and communal levels.

The seminar was opened by the IOF representative Bertrand Levant, the President of the Moroccan chapter of the Network of Local Elected Women of Africa (REFELA) Fatna El K'hiel, the representative of the Directorate General of Territorial Collectivities Mostafa Ameur, and the representative of the Democratic Association of Moroccan Women Khadija Errebbeh, in the presence of the Council of Europe's Coordinator for Neighbourhood Policy with the South Mediterranean, Pilar Morales.

This activity was organised within the framework of the joint programme between the European Union and the Council of Europe "Regional support for the consolidation of human rights, the rule of law and democracy in the southern Mediterranean" (South IV Programme), co-financed by both organisations and implemented by the latter.

Speech by Vice-President of the Congress Xavier Cadoret