LGBTI persons are often victims of discrimination, social exclusion and violence because of their sexual orientation or gender identity. These behaviours are manifestations of homophobia and/or transphobia. For several years the Congress of the Council of Europe has been working to combat discrimination against LGBTI people by addressing recommendations to local and regional as well as national authorities. It also organises fact-finding missions to examine particular situations in certain countries.

Report on LGBTI rights in Europe

In June 2021, the Congress adopted a report, resolution and recommendation calling on local and regional authorities to step up the fight against hatred and discrimination against LGBTI people.

This comes against the backdrop of declining LGBTI rights all over Europe and a disturbing picture of violations of their rights in several countries. Reminding local and regional authorities that the protection of these rights is essential to strengthening social cohesion and democracy, Congress outlines different ways in which backsliding on international commitments or adopted legislation in this respect occurs and examines how this negative trend has affected the lives of LGBTI people. The report also provides good practice examples from cities and regions that have adopted policies and legislation and acted in defense of LGBTI people’s rights.

Report on the situation in Poland

In June 2021, the Congress adopted a resolution on the role of local authorities with regard to the situation and rights of LGBTI people in Poland following a fact-finding mission on November 2020.

In response to the decision by a number of municipalities to declare themselves “LGBT ideology-free zones”, the Congress calls on Polish local and regional authorities to withdraw all declarations and resolutions against so-called “LGBT ideology” and all analogous texts regardless of their title.  Moreover, the Congress urges local and regional authorities in Poland to ensure the protection of vulnerable groups, with particular attention to the deleterious impact of hate speech on the lives of LGBTI people.

Report on discrimination towards LGBTI

The report adopted in 2015 by Congress calls on local authorities to mobilize against discrimination towards LGBTI people and to guarantee their rights through action plans.

The report describes the discrimination and challenges faced by these people and makes policy recommendations that will remove the obstacles to promoting respect of LGBTI people’s human rights based on examples of good practice and strategies with proven success. It underlines that all human beings are born free and equal in dignity and rights. Sexual orientation and gender identity are recognised as prohibited grounds for discrimination. The Congress recommends developing a culture of human rights, providing effective human rights protection and ensuring the delivery of discrimination-free policies and services. 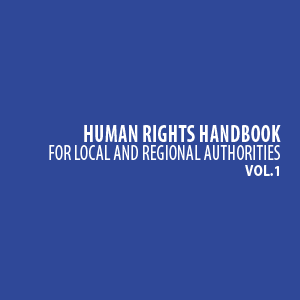 The Congress published in 2019 "Human rights handbook for local and regional authorities". One of its three chapters aims to combating discrimination against LGBTI people. Examples presented include the establishment of codes of conduct prohibiting discriminatory attitudes towards LGBTI people, training of officials including municipal police officers and consultation with the LGBTI community in the development of local policies. Some of the issues addressed in the Handbook are presented below. To view the whole content, download the Handbook in PDF format.

Knowing what exactly “LGBTI” means is the first step to not only appropriately using this term in the public discourse but also to developing effective LGBTI-inclusive policies. LGBTI is an umbrella term, an initialism for Lesbian, Gay, Bisexual, Transgender and Intersex persons. Below is a specific definition of each category.

International human rigths law applies to LGBI+ people as it does to everyone else, without distinction of any kind. In short, LGBTI+ people have the same rights and freedoms as other individuals :

While progress has been made, such as the recognition of same-sex marriage by 14 Council of Europe member States. LGBTI+ people suffer from negative attitudes especially in access to employment, housing or health but also from domestic violence, bullying and harassment and are deprived of legal recognition.

Local authorities are at the forefront of the fight against discrimination against LGBTI+ people. Public policies may meet some opposition due to the historical, political and legislative context of the country but also due to the religious and moral beliefs of the population.

The Congress gathered a set of good practices that have been successfully implemented by local and regional authorities that have actively advocate for the inclusion of their LGBTI+ communities including :

The Congress proposes a set of recommendations aimed at :

International Day Against Homophobia, Transphobia and Biphobia 17 May 2022 Strasbourg, France

Andrew Boff: "Cooperation between allies is crucial to counter discrimination against LGBTI people and advance their rights"

Report by the Secretary General on the State of democracy and human rights, 2017