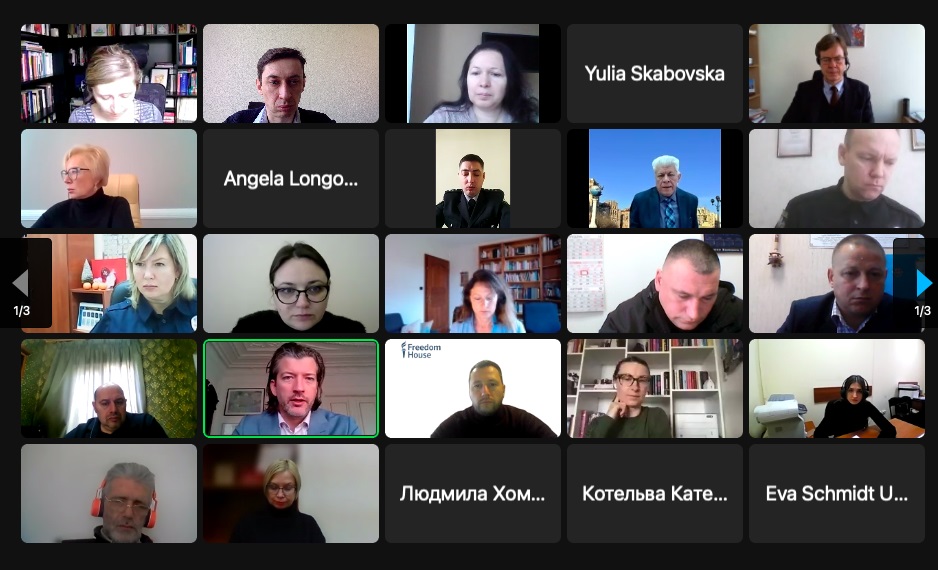 The report on the systemic mapping of national responses to hate speech in Ukraine was launched on Thursday 20 January.

The report was prepared through an inclusive and innovative methodology, with the contribution of state institutions, civil society, media and other project stakeholders. It contains an overview of the elements and dynamics of hate speech in the country and recommendations to all stakeholders on how to address it. It refers to the Council of Europe’s European Commission against Racism and Intolerance (ECRI) General Policy Recommendation No. 15 on combating hate speech which stresses the importance of a comprehensive approach to tackle hate speech and the need to reconcile the right to freedom of expression with other rights, notably those of groups targeted by hate speech.

In her opening remarks, Irena Guidikova, Head of the Inclusion and Anti-Discrimination Programmes Division of the Council of Europe stressed the importance of effective co-ordination to counter hate speech and invited “all stakeholders to use this meeting to commit to a concrete first step to effectively counter hate speech in the country”.

Marco Ferraro, Sector Manager for Human Rights and Strategic Communication of the Delegation of the European Union to Ukraine said: “The issue of hate speech has become of high importance for the EU in recent years and is also included in a broader approach to support democracy and human rights globally. Projects which are supported by the EU in Ukraine contribute to changing the public perception and legislation against hate speech and hate crimes”.

Liudmyla Denisova, Ukrainian Parliament Commissioner for Human Rights, thanked for the systemic research carried out the Council of Europe and noted that “the report will be used by the Office of the Commissioner to support its response to hate speech and its related decisions”. She also said that absence of unified definition of hate speech complicates dealing with the phenomena, therefore “introducing the definition of hate speech in the national legislation will contribute to appropriate response”.

Main challenges ahead and priority areas for intervention were the focus of presentation of representatives of the State Service on Freedom of Conscience and Ethnic Policy, National Council of Television and Radio Broadcasting, Commission on Journalistic Ethics, Roma NGO coalition, Centre for Human Rights ZMINA and the United Nations Human Rights Monitoring Mission in Ukraine. Education, raising awareness of citizens, but also of institutions and professionals, including journalists, and harmonisation of legislation were clearly identified among key priorities. The importance of effective co-ordination to prepare a national strategy against hate speech was also highlighted. Representatives of the above-mentioned stakeholders clearly stated their commitment and readiness to contribute to a national strategy.

The Council of Europe will continue working together with national stakeholders to support an effective and comprehensive response to hate speech.