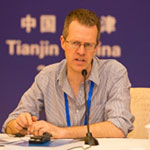 Professor at the University of Westminster, Centre for the Study of Democracy

Graham Smith joined the University of Westminster in November 2012 as Professor of Politics in the Centre for the Study of Democracy (CSD), Department of Politics and International Relations. Previously he was Professor of Politics and Head of Department at the University of Southampton where he worked from 1999. From 1997 to 1999 he was a Research Fellow at the University of Strathclyde. For five months from Feb 2010 he was a Fernand Braudel Senior Fellow at the European University Institute in Florence; and in the Fall Semester 2013, Senior Visiting Scholar on the Democracy Program at the Ash Center for Democratic Governance and Innovation, Harvard Kennedy School.