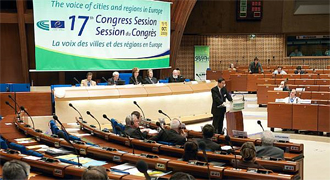 The Congress of Local and Regional Authorities of the Council of Europe is a pan-European political assembly which includes 612 members representing over 200,000 authorities in 46 European states.

The Congress conducts regular monitoring visits to all member states to appraise their implementation of the European Charter of Local Self-Government. After these visits the Congress sets out conclusions in its monitoring reports and adopts recommendations which the governments are required to follow, as well as resolutions with a view to improving the governance of local and regional authorities.

This monitoring activity provides a sound basis for constructive political dialogue with member states' governments. Through its activities, the Congress encourages them to take account of the local and regional dimension and to involve local and regional authorities fully in their political decisions. It also ensures that the subsidiarity principle is respected, a principle which ensures that some responsibilities and financial resources are transferred from central to local and regional authorities. Much legislative reform has been carried out by member states on the basis of the findings set out in Congress monitoring reports.

The Congress of Local and Regional Authorities has been taking part in the observer missions for local elections in the 47 Council of Europe member countries and beyond since 1990.

The Congress has conducted almost 100 election observation missions to date. Observing local elections is one of the Congress's action priorities. This activity complements the political monitoring of the European Charter of Local Self-Government, which constitutes the cornerstone of local democracy in Europe.

The results of the work of the Congress: conventions and charters

Since it was set up, the Congress has drawn up a number of international treaties, including the European Charter of Local Self-Government, which has become the international benchmark in this field, laying down common European standards to protect local authorities' rights.

The Congress plays an active part in projects to strengthen local democracy and transfrontier co-operation in Europe and encourages the setting up of national associations of local and regional authorities, Local Democracy Agencies and the new kind of Euroregion.

Who are the Congress observers?

The EU Committee of the Regions is associated with the Congress's election observation mission as part of its co-operation with the European Union.

At the end of every election observation mission, the Congress delegation publishes a preliminary statement, which is normally read out at an on-the-spot press conference at the close of the elections. A report is subsequently drawn up by the Congress member who was appointed Rapporteur for the mission. (more...)

This report is submitted to the Bureau of the Congress. It is subsequently assessed and adopted by the Congress in plenary session. A recommendation (to the national authorities) and resolution (to the local and regional authorities) mark the end of the observation exercise.The Congress of Local and Regional Authorities has been taking part in the observer missions for local elections in the 46 Council of Europe member countries and beyond since 1990, and for example it was also involved in election observations in Israel in 2008.

The Congress has conducted almost 100 election observation missions to date. Observing local elections is one of the Congress's action priorities. This activity complements the political monitoring of the European Charter of Local Self-Government, which constitutes the cornerstone of local democracy in Europe.

2007 : Adoption of the Congress new Charter

2011: The Committee of Ministers of the Council of Europe adopts the new Congress Charter

Congress of Local and Regional Authorities and Georgia

Georgia is represented in the Congress by a delegation of 5 representatives and 5 substitutes.