Partners and stakeholders of the EU/CoE Partnership for Good Governance II Project “Enhancing the Systems of Prevention and Combating Corruption, Money laundering and Terrorist Financing in Georgia” agree on continued cooperation during the third Steering Committee Meeting 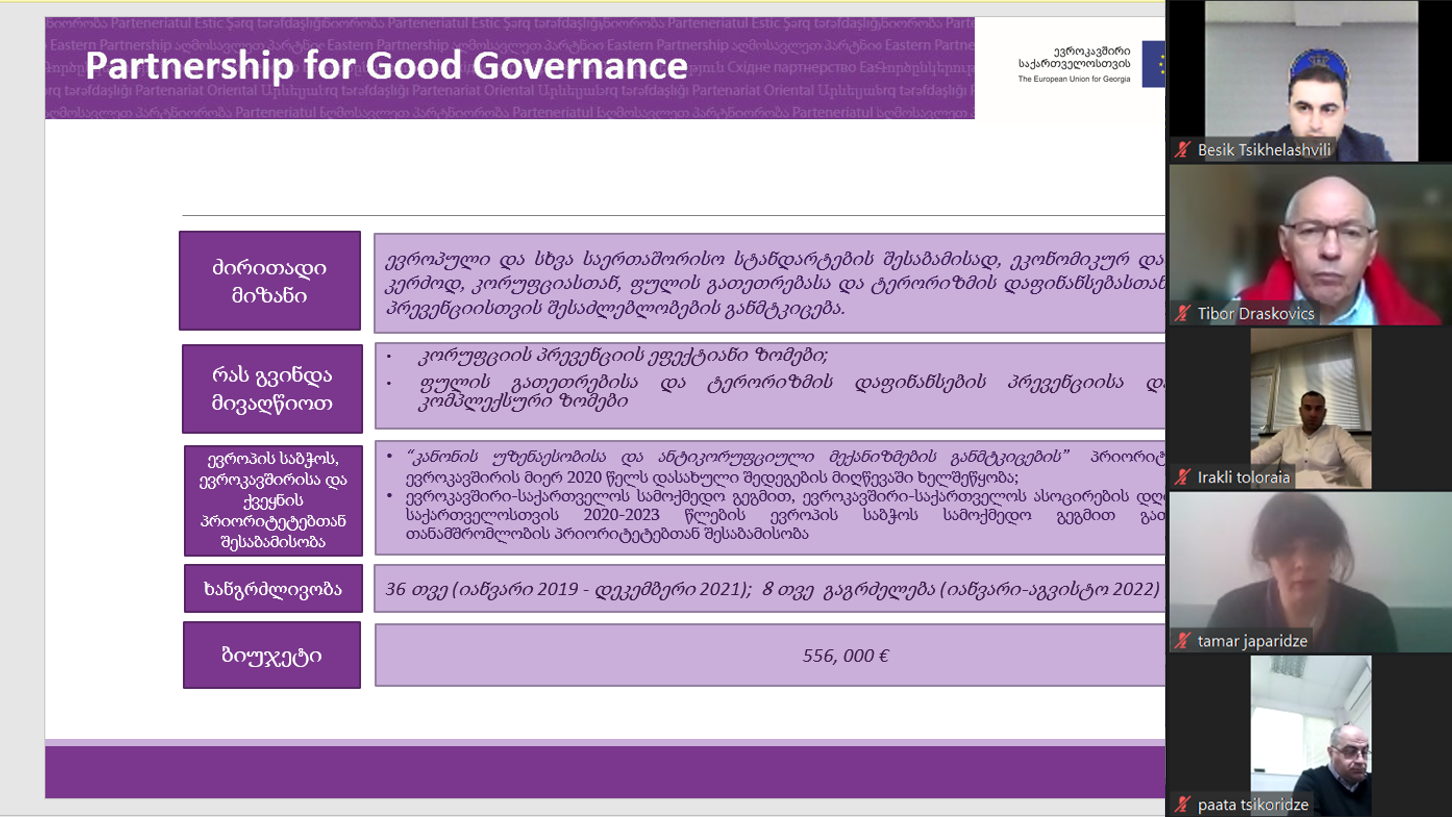 The third Steering Committee Meeting of the EU/CoE Partnership for Good Governance Project on “Enhancing the systems of prevention and combating corruption, money laundering and terrorist financing in Georgia” was organised on 17 November 2021.

The project is one of the six endeavours which constitute the second phase of the EU/CoE Partnership for Good Governance (PGG). The overall objective of the programme is to support the Eastern Partnership countries to counter economic crime through regional and country-tailored activities which build on the outcomes of the first programme phase. The focus is on anti-money laundering and counter terrorist financing, with reinforced component on combatting corruption added in this new programme phase.

The meeting was attended by representatives of the project counterparts and beneficiary institutions. The European Union Delegation to Georgia was represented by Ms Colombe de Mercey who delivered the opening remarks together with Mr Evgeni Evgeniev, Head of Unit in the Economic Crime and Cooperation Division of the Council of Europe and Mr Nikoloz Chinkorashvili of the Office of the Prosecutor General of Georgia. The EU funded project on Public Administration Reform of Georgia was also invited to join the meeting.

The discussion opened with an overview of the Project, its scope of action, and expected goals. Cognizant of the context in which the project is being executed, attention was placed on the potential challenges and risks faced during project implementation, as well as on the measures taken to manage risks such as CoVid19, and challenges such as the restructuring of the anti-corruption institutional infrastructure in Georgia.

The project stakeholders in Georgia were keen in stressing how those circumstances were of a temporary nature and they only called for reinforced cooperation with the project, especially in view of the preparations for the upcoming anti-corruption AML/CFT national strategy and action plan.

During the meeting, the project team presented the activities implemented in 2020-2021, and the results achieved so far. Project partners spotlighted the enhancing of capacities on AML/CFT measures for private and public institutions, as well as the trainings for investigators and prosecutors on investigation, adjudication and prosecution of money laundering and corruption offences as some of the most relevant project results.

In looking forward, the project counterparts in Georgia were informed of the approval of a project no-cost extension for 8 months, which will prolong project activities until August of 2022. The project workplan for the coming months was briefly presented, and an agreement was built on the areas of interest for future activities, which included: Beneficial Ownership Transparency, reinforced capacities for the Financial Monitoring Service (FIU), and liability of legal persons amongst other topics. Beneficiaries expressed their readiness to participate in project activities remotely or in person.

The next Steering Committee Meeting was pencilled in for mid-April 2022.

The activity was organised within the EU/CoE Partnership for Good Governance Project “Enhancing the systems of prevention and combating corruption, money laundering and terrorist financing in Georgia” (PGG II-Georgia), launched in January 2019.