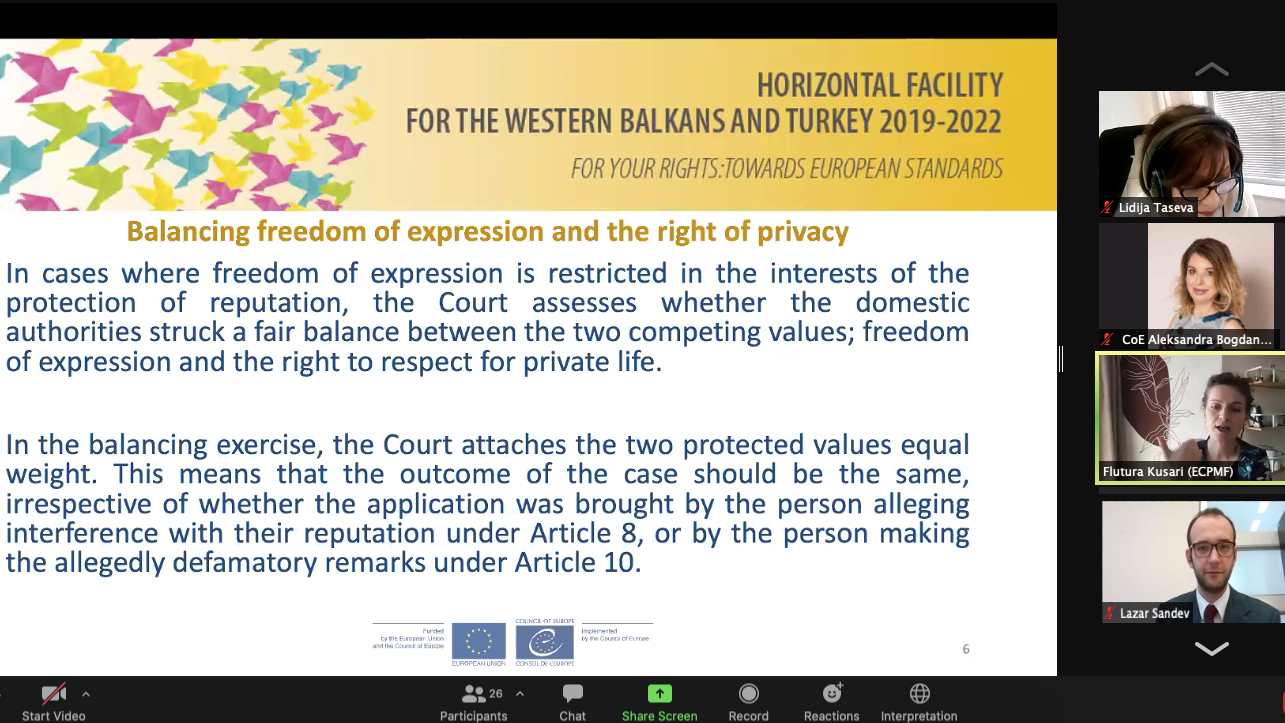 More than 20 judges and public prosecutors attended the cascade training on freedom of expression and freedom of the media, organised by the joint EU and Council of Europe JUFREX action in partnership with the Academy for judges and public prosecutors of North Macedonia. This first cascade training with the Academy focused specifically on hate speech and defamation.

The European standards with regard to hate speech and defamation and the case-law of the European Court of Human Rights (ECtHR), were introduced by the Council of Europe international expert putting emphasis on the importance of ensuring protection under Article 10 of the European Convention of Human Rights that regulates the right to freedom of expression. Balancing the right to freedom of expression and the right to privacy, each regulated by Article 10 and Article 8 of the ECtHR accordingly, were discussed with judges and prosecutors dealing with defamation cases.

During the online training, the local experts elaborated on the case-law and practice of the domestic courts in North Macedonia on hate speech, defamation and insult and encouraged discussion among the participants to exchange their experience on the practice in the domestic courts, as well as their views on how to improve their proceedings in line with European standards. The participants shared their professional experience mostly in defamation and insult cases, the presence of strategic lawsuits against public participation (SLAPP suits) and the (non)professionalism of the journalists.

This cascade training is the first in the line of four cascade trainings that will be contributing to strengthening the capacities of judges and public prosecutors from North Macedonia in the field of freedom of expression, towards reaching the European standards set by the European Convention on Human Rights and the ECtHR and aiming to ensure sustainability during the implementation and application of European standards in their everyday professional work.

This event is organised under the Grant Agreement with the Academy for judges and public prosecutors of North Macedonia within the action on “Freedom of expression and freedom of the media in North Macedonia (JUFREX 2)” . This action is a part of the joint European Union/Council of Europe programme “Horizontal Facility for the Western Balkans and Turkey II”, that enables the Beneficiaries to meet their reform agendas in the fields of human rights, rule of law and democracy and to comply with the European standards, including where relevant within the framework of the EU enlargement process.