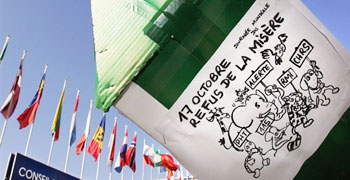 The Council of Europe's strategy for combating poverty is aimed at strengthening social cohesion in Europe, preventing and combating social exclusion. The Council of Europe has a number of legal instruments chief among them the European Convention on Human Rights which establishes rights and fundamental freedoms, and the European Social Charter which establishes social rights, including the right to protection against poverty and the right to housing.

Each year, the Council of Europe takes part in the celebration of World Day to Overcome Extreme Poverty and organises a ceremony in front of a replica of the Commemorative Stone, symbolising the refusal of extreme poverty, which was laid in 1993 on the Palais de l'Europe forecourt.

Created on the initiative of Father Joseph Wresinski and of 100,000 defenders of human rights, who gathered together on the Trocadero Plaza in Paris on 17 October 1987 to honour victims of hunger, violence, and ignorance, to express their refusal of extreme poverty, the World Day to Overcome Extreme Poverty is celebrated on that date, each year since 1992.

Acting together to eradicate extreme poverty in Europe

On the occasion World Day to Overcome Extreme Poverty, the Presidents of the Committee of Ministers, Parliamentary Assembly, Congress of Local and Regional Authorities and Conference of INGOs, adopted a declaration stressing the need and urgency of continuing the fight against extreme poverty. The declaration that was made public during an INGO conference dedicated to the problem, calls for joint action with a multidimensional, structural, progressive and long-term approach.

25 replicas of the commemorative stone in honour of victims of extreme poverty in Paris have been laid at symbolic sites in 10 countries across 4 continents. On 21 May 1993, one such stone was laid at the foot of the steps at the Council of Europe in Strasbourg on the occasion of the European rally "Bridging the borders of exclusion" which brought together 400 young people from 18 countries.