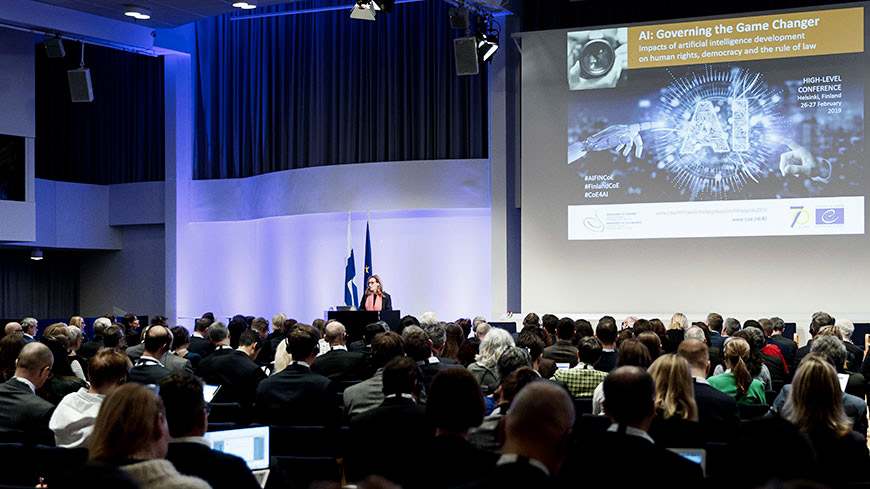 A two-day High-Level Conference “Governing the Game Changer – Impacts of artificial intelligence development on human rights, democracy and the rule of law” opened in Helsinki today.

”New technology, the collection of massive amounts of data, and the use of information, has already changed the lives of people all over the world. Yet, I believe that the “Big Bang” has yet to come. Questions to be raised include: Are some groups neglected or do they face special challenges due to biased algorithms? What happens to democracy, security and accountability? What are the impacts of artificial intelligence on justice systems? How can we ensure that artificial intelligence supports the advancement of democracy and the rule of law?, said the Minister for Foreign Affairs of Finland Timo Soini, in his opening speech.

”The Artificial Intelligence revolution long forecast is no longer something for the future. We are already living it, here and now. So the goal of this Conference must be to separate fact from fiction, to distinguish clearly what are the real advantages that AI offers, what are the risks that accompany them, and how best can we prevent and mitigate the dangers they pose. For the Council of Europe, we are taking a leading role in helping our member states to harvest the opportunities that come with technological innovation while safeguarding the standards emanating from the European Convention on Human Rights and other legal benchmarks,” Council of Europe's Secretary General, Thorbjørn Jagland said.

”We must remain extremely mindful of manipulations of opinion through the propagation of false news, including during election campaigns. This is the reason why France passed a law relating to the fight against manipulation of information in December 2018. The law imposes transparency obligations to online platforms on the contents of sponsored information as well as on the identity of the sponsors. This law also establishes an emergency judicial procedure to fight against the dissemination of inaccurate or misleading information or allegations, the Minister of Justice of France Nicole Belloubet said.

Sessions on AI and Human Rights and on AI and democracy engaged some 400 high-level experts from governments, international organisations, business, technology, academia, civil society and the media. An exhibition space, “AI in Action”, allowed the participants to explore the work of the different stakeholders and actors on the field of AI.

Video recording of the conference