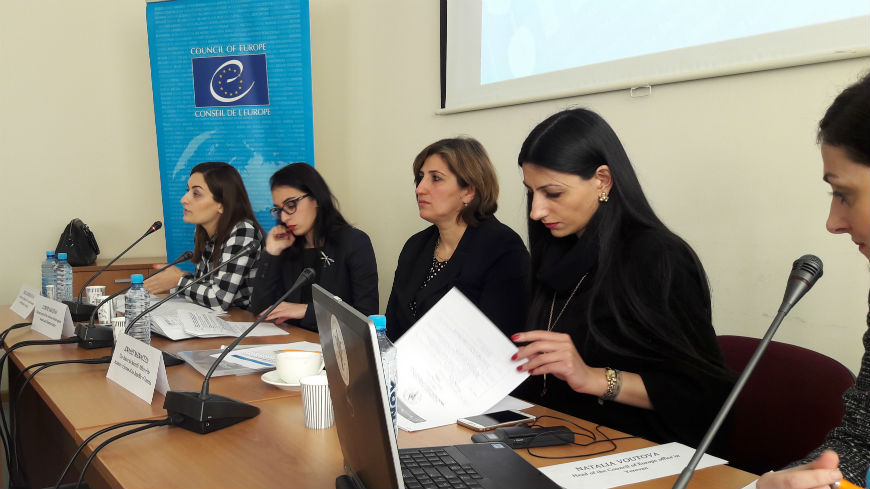 The recently developed HELP course on Violence against Women and domestic violence was launched for the first time in Yerevan, for a group of Armenian investigators, prosecutors and lawyers. The kick-off event was co-organized with the Council of Europe Programme for Human Rights Education for Legal Professionals (HELP) in cooperation with the Academy of Justice of the Republic of Armenia.

The launch of the HELP course was held only one day after the Armenian National Assembly adopted the first law aimed at combatting domestic violence. The course implementation will play an important role in assisting legal professionals in applying the national legislation in line with the European and international standards.

The event was opened by Natalia Voutova, Head of the Council of Europe office in Yerevan, Anahit Manasyan, Vice-Rector for Scientific Affairs of the Academy of Justice, Vigen Kocharyan, Deputy Minister of Justice of the Republic of Armenia and Emil Amirkhanyan, First Deputy Chairman of the Advocates Chamber of Armenia.

Following the presentation of the HELP Programme, the participants could benefit from a presentation on European standards and laws on violence against women and domestic violence by Lusine Sargsyan, Head of Department in the Office of the Human Rights Defender and HELP certified tutor, and Inessa Petrosyan, lawyer. In addition, Gohar Hakobyan, Head of Unit at the Ministry of Justice presented the legal developments in the area of violence against women and domestic violence at the European and national level and spoke about the novelties introduced with the newly adopted Armenian law. The presentations were followed by a discussion among the participants.

The course will be tutored by Lusine Sargsyan and held from 15 January 2018 until the end of March 2018.

The free online HELP course on Violence against Women and Domestic Violence can be accessed here in English.