International Day to End Impunity for Crimes Against Journalists 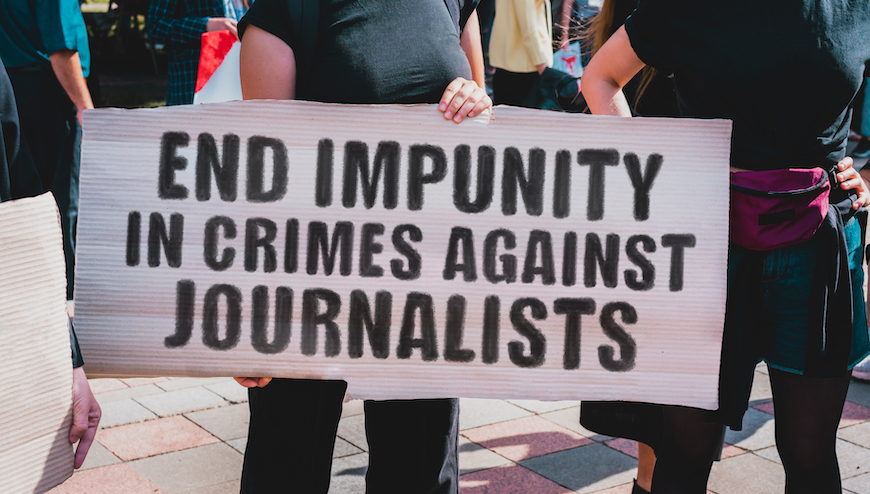 2 November marks the International Day to End Impunity for Crimes Against Journalists, a pressing political priority across Council of Europe member States.

Striving for full achievement of this fundamental goal, the Organisation is today equipped with a rich standard-setting arsenal aimed at safeguarding freedom of expression and at facing threats against it. The 2016 Recommendation on the protection of journalism and safety of journalists and other media actors - a landmark instrument providing specific guidelines in the areas of prevention, protection, prosecution, and promotion of information, education and awareness rising – includes a specific focus on impunity. The Recommendation considers “imperative that everyone involved in killings of, attacks on and ill-treatment of journalists and other media actors be brought to justice” and spells out a number of general requirements which authorities should meet carrying out the investigations into such crimes and the prosecution of those responsible for them.

The Recommendation’s Implementation Guide  “How to protect journalists and other media actors?” - offering, among others, a compilation of good practices that can inform the preparation of national action plans - sets out practical and operational requirements to stem impunity, ranging from the introduction of tailored legal reforms to the training of law enforcement, judicial and other public officials responsible for fulfilling state obligations concerning the protection of journalists and other media actors. To continue providing guidance to member States on the effective implementation of existing standards, the Guide is currently undergoing a process of extension to all four pillars of the recommendation.

As reported by the last Platform’s Annual Report Defending Press Freedom in Times of Tension and Conflict, by the end of 2021, 35 impunity cases had been registered on the Platform since 2015. Notwithstanding new developments in several cases, none warranted any of these alerts to move to “progress” or “resolved”.

The Platform’s data clearly confirm that engagement from member States in terms of effective implementation remains crucial to safeguard journalists’ safety and to end impunity.

This was acknowledged by the Committee of Ministers in several occasions, not least in the course of the Council of Europe’s Conference of Ministers responsible for Media and Information Society held in Cyprus on 10-11 June 2021. The Conference put media freedom and safety of journalists on the top of governments’ political agendas, prompting concrete action steps towards standards implementation and resulting in the adoption of a Final Declaration and four resolutions. Amongst these, adopting the Resolution on the safety of journalists, the Ministers recognised that “The prevailing impunity, which fuels further threats and attacks on journalists, remains the most serious concern” and therefore committed to dedicate specific attention and resources to stemming impunity for killings of, attacks on and ill-treatment of journalists and other media actors. Aware that “the urgency of the situation needs to be matched by an urgent engagement at the political level by member States” the Ministers also invited the Council of Europe to “carry out a comprehensive campaign, at European level, to promote the protection of journalism and the safety of journalists and support corresponding campaigns at national level.”

Therefore, a Council of Europe campaign will be publicly launched next year. Fighting impunity will be one of its main focus, to be facilitated by encouraging, supporting and guiding member States in their effort to develop national action plans with a view to boost their standards, fill the gaps and enhance co-ordination.