Mobilise against sexism! in Croatia

National NGOs’ campaigns within the project “Mobilise against sexism!” were conducted by the member organisations of the European Women's Lobby (EWL) in Belgium, Bulgaria, Croatia, Hungary, Ireland, the Netherlands, Portugal, Romania and Spain in 2020-2021 to raise awareness and combat sexism in key sectors of society.

A first phase of the project was conducted in 2020 in nine countries. The second phase was implemented in seven countries (all except Belgium and Ireland).

The project aimed to promote the implementation of the Council of Europe Recommendation CM/Rec(2019)1 on preventing and combating sexism. It used the tools produced within the Council of Europe Campaign “Sexism: See it. Say it. Stop it!”, including an action page, a video and a quiz explaining what sexism is and what can be done to prevent and combat it.

In 2021, the EWL also published a statement with recommendations on sexism, which refers to the Recommendation CM/Rec(2019)1.

The project was implemented by the Women’s Network Croatia (WNC) in Croatia.

The WNC aimed to raise awareness about sexism and to advocate for the Croatian Parliament to adopt legislation and policies in line with the Council of Europe Recommendation on preventing and combating sexism.

The project was implemented in 12 cities, thanks to local women’s organisations, and through various activities: from workshops and round tables to public actions in cooperation with local authorities, the police, the employment office and other stakeholders.

A round table discussion on sexism in everyday life and a presentation of the recommendation were organised in the city of Pakrac, in collaboration with “DELFIN”, a civil society organisation member of WNC. Local authorities, the police, the employment office and other stakeholders were present. The activity was covered by both the local press and the local radio.
In Rijeka, the association “SOS Rijeka” presented the recommendation and the campaign at the online panel discussion on sexual harassment in academic community. The aim was to raise awareness on the topic of sexual harassment among professors and students and to encourage more efficient reaction of relevant institutions.

In Poreč, the “Centre for Civil Initiatives” organised a meeting with the Deputy Mayor and Nadia Štifanić Dobrilović, Head of Social Activities of the city, and presented the campaign and the recommendation to them. After the meeting, they distributed materials to citizens in a public action. Local media reported on the event and the fact that campaign was presented to local authorities.

Lobbying for the National Policy on gender equality and the topic of sexism to become a part of it (online). Legal experts, academics, and representatives of the WNC participated. 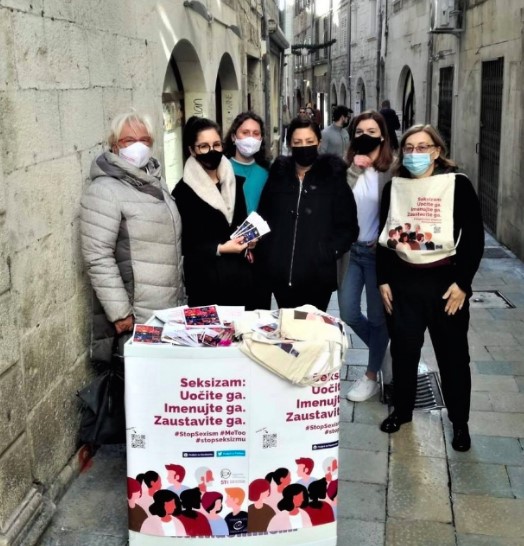 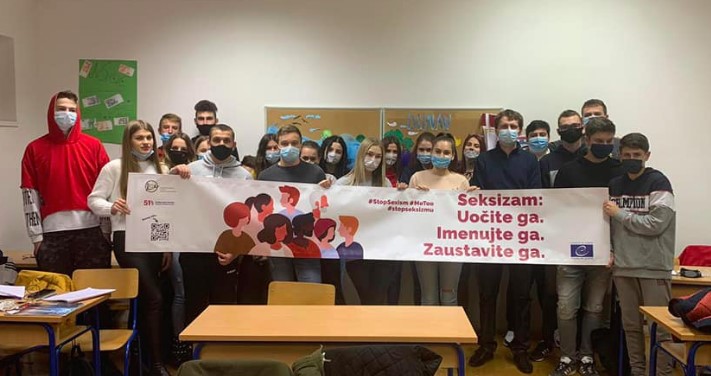 Snježana Vasiljević, a professor at the Law Faculty of University of Zagreb wrote a handbook on the Council of Europe Recommendation and actions that need to be taken for its implementation in Croatia. This is now adopted and will be added in the curriculum educational materials to be used in classes at the Law Faculty of the University of Zagreb. The handbook will also be used for further advocating and media. 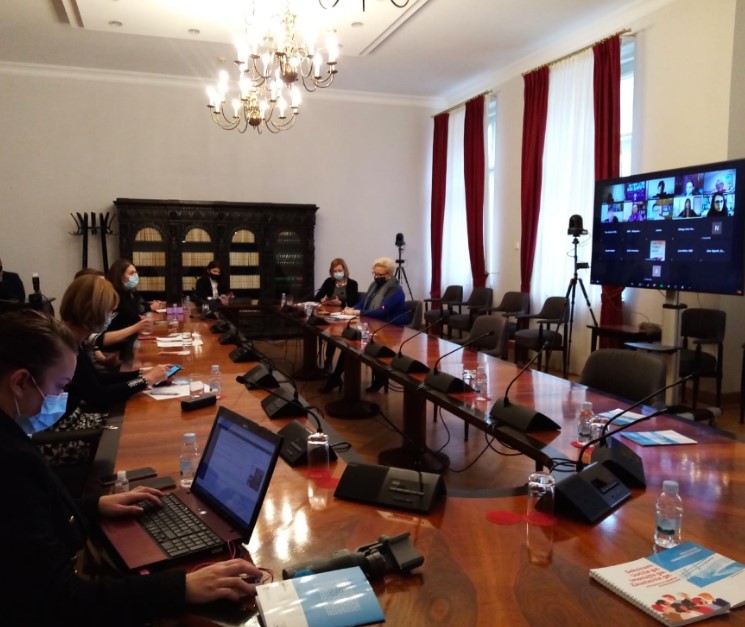 In Vukovar, Women’s Association local member organised a public action, with the aim of raising awareness in general public on effects of sexism. During the public action, campaign materials were distributed. Representative of the Women’s Association Vukovar presented the campaign and the recommendation during the online meeting of the Municipality Team of Vukovar and Srijem for Prevention and Combating Violence Against Women.

Association “Hera” organised campaign activities in Križevci and Đurđevac. In co-operation with the Gender Equality Councils of Municipality of Koprivnica and Križevac, campaign materials were distributed. Deputy Mayors Danijel Šaško and Mario Martinčević expressed publicly their support for the campaign and took pictures with the campaign banner.

In Osijek, the association “Izvor Tenja” organised a series of activities during the 16 Days of Activism Against Violence Against Women, including public action promoting the recommendation and distributing campaign materials.

In Korenica, “Nit Korenica” organised activities of promotion of the campaign and the recommendation at Red Cross Plitvička jezera and in the Culture and Information Centre in Korenica. SIilar activities were also organised by “Domine” in Split, the association “Nepokorne” in Šibenik, and the Centre for Social and Humanist Research in Zadar.

Press conference in front of the Croatian Parliament (Zagreb): “The new gender equality policy in Croatia!”. 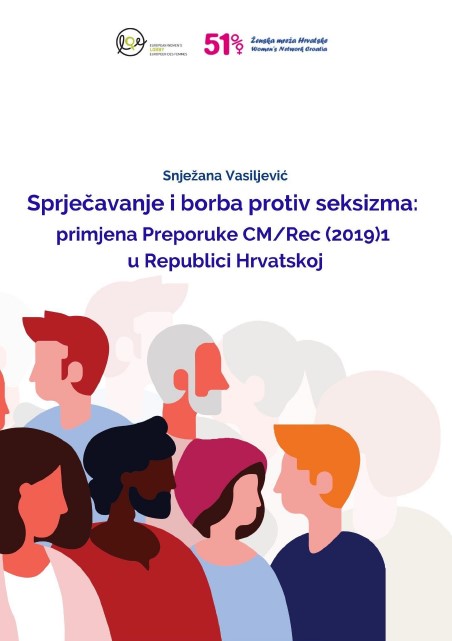 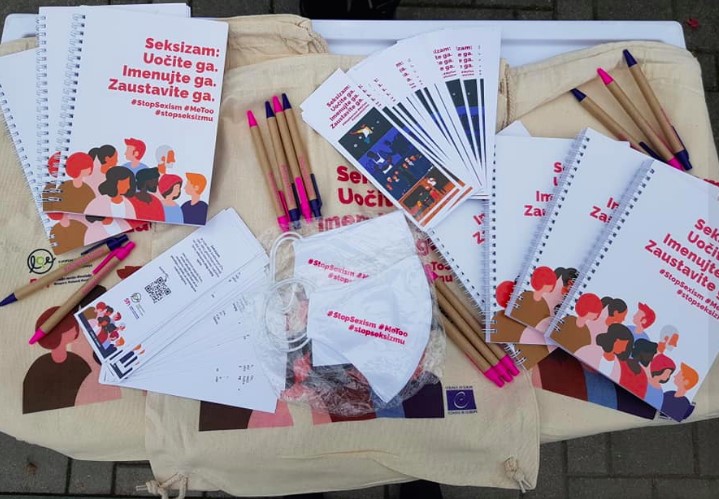 Mirjana Kucer, Board member of WNC & Adriana Bego, Coordinator of the campaign 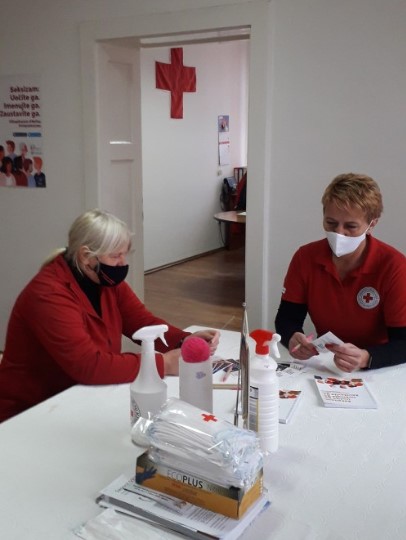