Administration of Justice on Sexual Violence Crimes against Women in Georgia 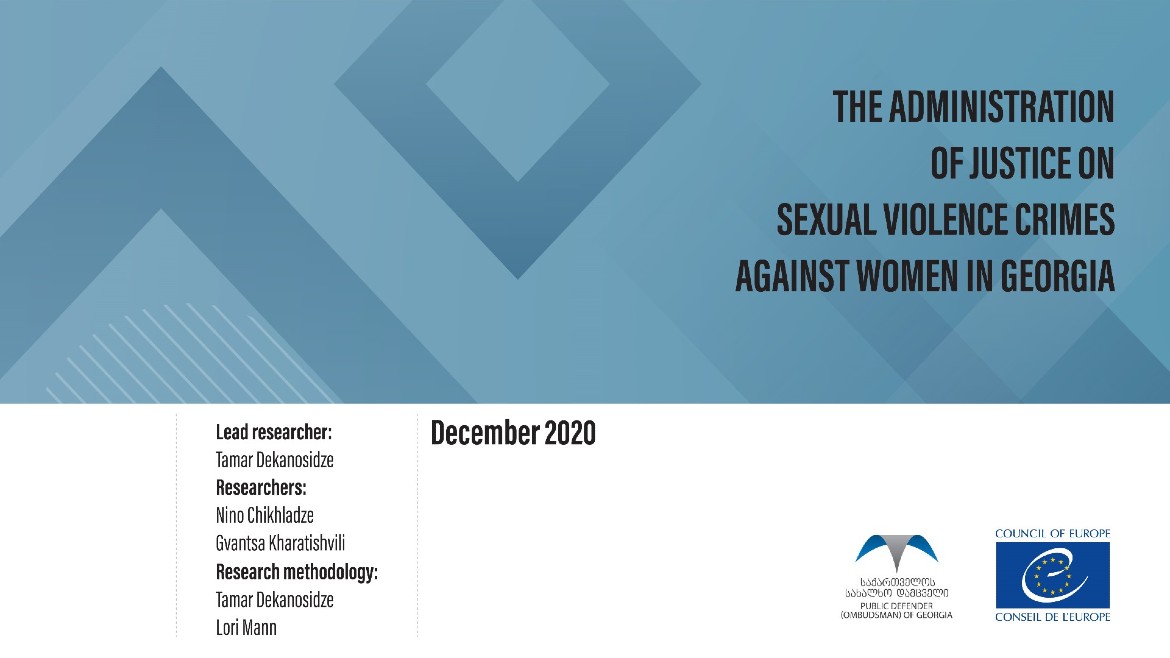 On 8 December 2020, the Council of Europe and the Public Defender of Georgia held a joint online conference and presented the findings of the study “Administration of Justice on Sexual Violence Crimes against Women in Georgia”.

The research study analyses legislative gaps as well as barriers in investigation, prosecution and judicial proceedings of sexual violence crimes in Georgia after the ratification of the Council of Europe Convention on Preventing and Combating Violence against Women and Domestic Violence (the Istanbul Convention) and its entry into force in 2017 in Georgia. The study proposes recommendations for enhancing the legislation and the criminal policy. First ever in Georgia, the study examines the effectiveness of criminal justice response to sexual violence crimes in light of international human rights standards.

Nino Lomjaria, Public Defender of Georgia, Natalia Voutova, Head of the Council of Europe Office in Georgia and Lela Akiashvili, Advisor to the Prime Minister on Human Rights and Gender Equality Issues, made welcoming remarks.

In Georgia, reporting rates on sexual violence are low1 and justice is administered only in a small number of cases. In the research period 1 June 2017 – 1 May 2019, there were only 361 reports to the police concerning sexual violence and out of the reported 361 cases, investigation was launched in 251 cases. In the same period, only 26 verdicts were delivered - 20 perpetrators were convicted and 6 acquitted.

In none of the cases, the justice system recognised sexual violence as a form of discrimination against women.

The study also shows that the definitions of sexual violence in the Criminal Code of Georgia (Articles 137-139) are not based on the lack of free or voluntary consent of the victim, as required by international human rights standards.

Evidentiary requirements in sexual violence cases are overwhelmingly restrictive and inflexible. In practice, the perpetrator will not be brought to justice, if victim’s evidence is not corroborated by multiple sources. This leads to impunity of perpetrators.

Lack of female forensic examiners prevents victims from undergoing forensic examination which in many cases means that the investigation will not go forward, and the perpetrator will not be held to account.

During criminal proceedings, survivors are often asked humiliating questions that serve to discredit them and may traumatise them further.

The study concludes with several recommendations on how to overcome barriers of women’s access to justice and improving the accountability of perpetrators of sexual violence.

The event was organised in the framework of the Council of Europe project “Promoting an Integrated Approach to End Violence against Women and Enhancing Gender Equality in Georgia” forming a part of the global campaign of 16 days of activism against gender-based violence.

[1] According to the National survey on violence against women, 2017, UN Women, GEOSTAT and the European Union, only 26 per cent of women who reported having experienced physical or sexual partner violence had reported this violence to any agency or support service. p. 85. Available at: https://www.geostat.ge/media/26061/National-VAW-Study-Report-ENG.pdf