Sejdić and Finci - After 10 years of absence of progress, new hopes for a solution for the 2022 elections 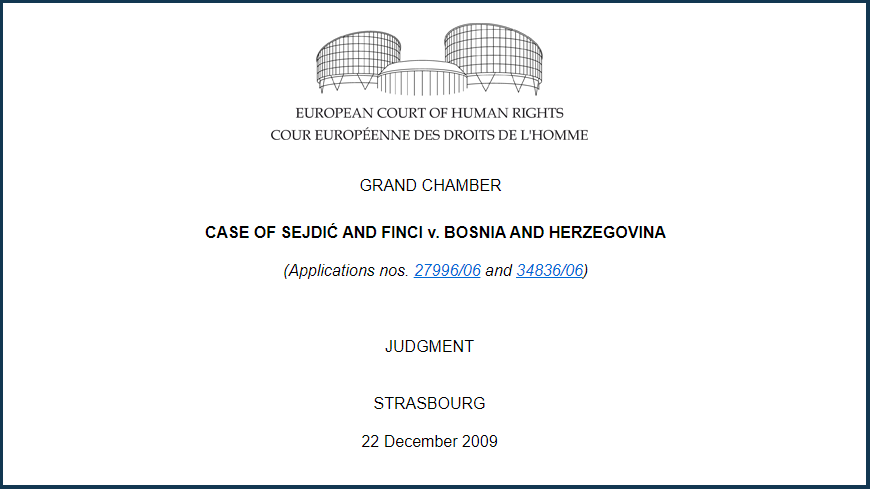 Today the 22 December, there is a disturbing anniversary. It is today 10 years since the delivery of the judgment of the European Court of Human Rights in the Sejdić and Finci case.

This judgment confirmed the discriminatory nature of the electoral system in Bosnia and Herzegovina – preventing all those not willing or capable to affiliate with a constituent people (i.e. Bosniaks, Croats or Serbs) or not meeting a combination of requirements of ethnic origin and place of residence – from standing for election to the Presidency and the House of the Peoples.

Despite numerous efforts, the necessary reforms have not been adopted and the situation has been characterised by the Committee of Ministers of the Council of Europe as a manifest breach of Bosnia and Herzegovina’s unconditional obligations under the European Convention on Human Rights, and thus also of its undertakings as a member State of the Council of Europe.

In order to eventually overcome this serious situation and move efficiently forward, the Committee extended already last spring an invitation to a minister of the new government to emerge from the 2018 elections to come to the Council of Europe’s headquarters in Strasbourg to discuss the strategy necessary to ensure that constitutional and legislative arrangements are in place before October 2021, i.e. one year before the next 2022 elections. This meeting has been repeatedly postponed as a result of the difficulties in forming a new government after the 2018 elections.

The necessity of efficient action is underlined by the fact that the Convention should, as expressly stated in the Constitution of Bosnia and Herzegovina, be superior to all laws in the country and that all persons in the country should enjoy the rights and freedoms guaranteed, including in the political field.

The necessity of moving forward is also stressed in the EU accession process and by the international community, notably the OSCE and the UNO.

Country factsheet for Bosnia and Herzegovina

HUDOC EXEC: status of execution of Sejdić and Finci  case