Jemma Hasratyan : "We need not only women ready to run as candidate; we also need a society prepared to vote for women" 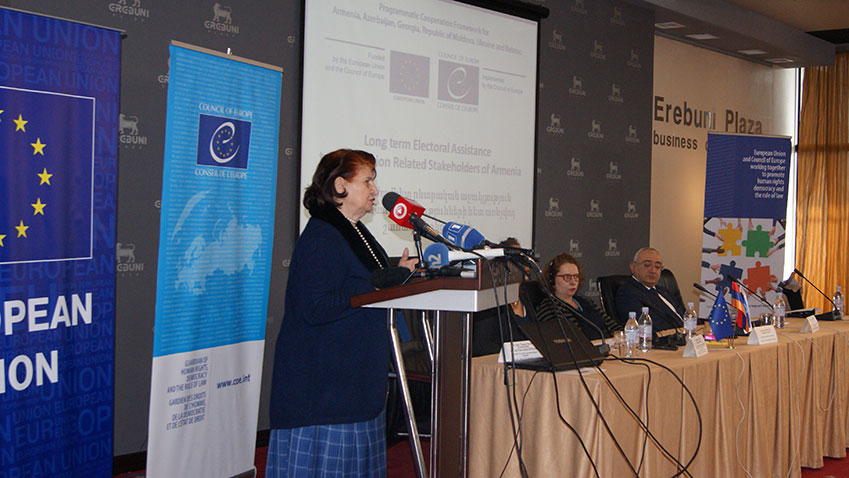 A new project to improve cooperation between electoral stakeholders, promote political participation of women and encourage active participation of young voters in the electoral process was officially launched Friday 5 February in Yerevan by Council of Europe and European Union.

The project “Long-term electoral assistance to the election related stakeholders of Armenia” is a country specific program for Armenia to reinforce activities developed by the Council of Europe’s Division of Electoral Assistance and Census at regional level within Eastern Partnership countries (http://eap-pcf-eu.coe.int).

Support actions for the Central Election Commission for training programs of election commissioners at all levels and for an external communication strategy in order to increase transparency and visibility of their work are as well foreseen in the program as awareness raising activities to promote women´s participation in politics. Other important components of the program cover an educational program for first time voters and capacity building measures of domestic observer organizations on report writing and international standards in elections.

Ms Natalia Voutova, Head of Council of Europe Office in Yerevan referred to the importance to increase the number of voters and the participation of young people in elections. According to data of Statistical service, there are 18-24 thousand young voters in Armenia who make up about 15% of 340 thousand voters. This year there will be 40 thousand new voters, that is, their number will exceed 70 thousand in 2017. One of the program’s purposes is to encourage their active participation in elections, she said.

Ms Vutova, as well as Ms Jemma Hasratyan, President of Armenian Association of Women with University Education, highlighted the challenge to involve women in political decision making positions. Although in the current years minimal improvements could be achieved at national level (3 female ministers out of 18) and in town councils (with 9,2 % female councilors), there are still no women among ten regional governors of Armenia, and no mayor nor deputy mayors in the 48 municipalities of the country. "We need not only women ready to run as candidate; we also need a society prepared to vote for women." Ms Hasratyan pointed out.

Central Election Commission Chair Mr Mukuchyan welcomed the project as very timely. As soon as the new electoral code will be adopted, the training curriculums and tools for territorial and precinct commissioners need to be adjusted and hence Council of Europe’s support arrives exactly at the right moment.

The event was covered by ten national TV and print media as well as by two international media.