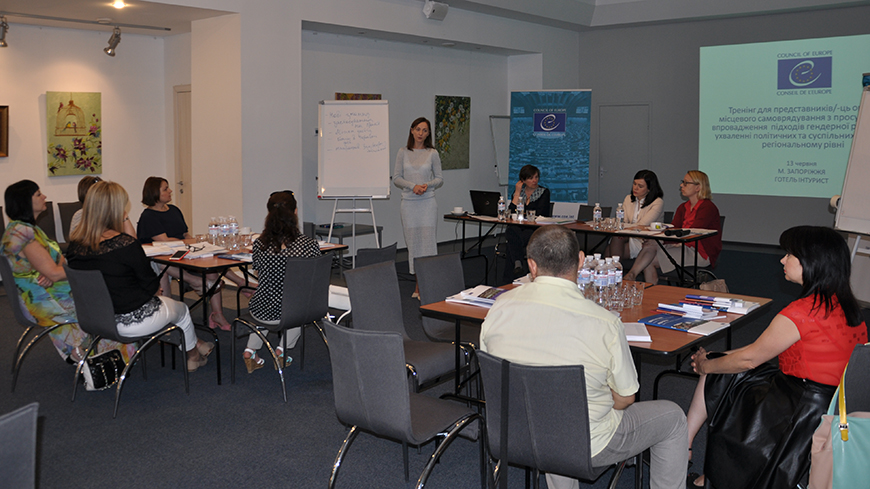 On 9-11 July 2018, trainings on gender equality approach in political and public decision making processes at regional and local levels were held for representatives of local self-government bodies in Odesa, Vinnytsya and Zhytomyr. The same trainings had already been held in Kharkiv, Dnipro and Zaporizhya earlier in June. In total, 84 officials from 47 local self-government bodies were trained on ensuring equality of women and men in local life, particularly, via balanced participation of women and men in political and public decision-making.

Representatives of local self-government bodies enhanced their knowledge in conducting gender analysis and assessment in different spheres of public domain for further sustainable development of their local communities, as well as in developing and implementing gender sensitive policies and programs at local level.

Council of Europe’s acquis on gender equality, particularly, Council of Europe Gender Equality Strategy 2018 – 2023, standards and recommendations on balanced participation of women and men in political and public decision making processes, along with existing European good practices, were also presented and discussed during the trainings. Participants of the trainings were also given the opportunity to learn from each other by sharing and discussing successful examples and lessons learned from Vinnytsya and Zhytomyr cases. As it is known, Vinnytsya has become the first city in Ukraine to sign the European Charter for Equality of Women and Men in Local Life, which the Congress of Regional and Local Authorities of the Council of Europe invites the local and regional authorities of the Member States of the Council of Europe to sign and implement (Resolution 404 (2016)). Herewith, the Zhytomyr local council has recently adopted a decision to sign this document and has commenced respective preparations for that purpose.

The trainings were initiated by the Parliamentary Sub-Committee on gender equality and non-discrimination and supported by the Council of Europe within the framework of its Action Plan for Ukraine for 2018 – 2021*.

* Trainings were organized by the Division of Electoral Assistance within the framework of the Council of Europe project “Supporting the transparency, inclusiveness and integrity of electoral practice in Ukraine”