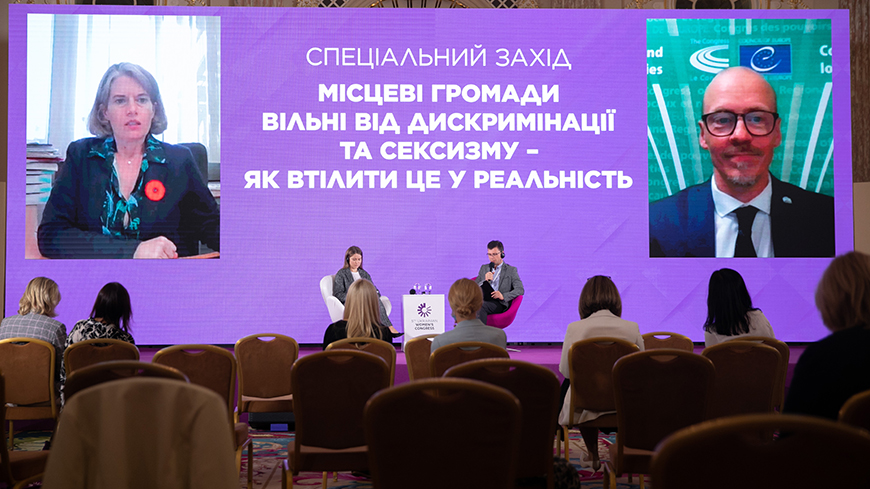 On the screen, Christelle Wieder, Deputy Mayor in the city of Strasbourg, France, in charge of gender equality and women’s rights and Thomas Andersson, Chair of the Current Affairs Committee, Congress of Local and Regional Authorities of the Council of Europe, Sweden

Current challenges and possible strategic solutions for building non-discriminatory local communities, in particular, European and Ukrainian experience in this field, were discussed on September 16, 2021 during a special event of the Council of Europe* within the V Ukrainian Women's Congress held in Kyiv on September 15-16, 2021.

Among the speakers of the discussion "Local communities free from discrimination and sexism – how to make it a reality", were:

The discussion was moderated by Yuriy Tabachenko, executive producer of the First Channel of Ukrainian Radio, journalist.

"Sexism is the result of an imbalance of power between women and men in our societies," said Thomas Andersson, Chair of the Current Affairs Committee of the Congress of Local and Regional Authorities of the Council of Europe. — "For us as the Congress, women's political participation is essential for equality and democracy. That is why we are working on this issue — we promote gender equality and the fight against sexism in all its forms".

During the discussion, Thomas Andersson noted that as a result of cooperation with local authorities of Ukraine in only three years, more than 60 Ukrainian cities signed the European Charter for Equality between Women and Men in Local Life.

It is important to recall that, with the support of the Congress of Local and Regional Authorities of the Council of Europe, a special guide has been prepared for Ukrainian women and men on how to combat and prevent sexism at local level. An E-course for Ukrainian cities aimed at equipping local representatives with necessary knowledge on how to develop gender-sensitive policies and implement them on the ground has also been launched.

During the discussion, Thomas Andersson said that in Sweden, the policy of equal distribution of responsibilities regarding care of children, including specific organization of the work of kindergartens, has helped women to take an active part in political and community life.

"In Sweden we have almost reached the proportion 50/50 for women and men in the lead positions, particularly, in my region. So, we are eager to continue working with Ukrainian authorities to promote inclusive societies, fight sexism and discrimination", he added.

According to the Chair of the Current Affairs Committee in the Congress of Local and Regional Authorities of the Council of Europe, in order to make local communities free from discrimination and sexism, we need the full involvement and full participation of all stakeholders.

Christelle Wieder, Deputy Mayor of the city of Strasbourg, France, in charge of gender equality and women’s rights, also shared her experience with the Ukrainian audience. She noted that her position itself is already a huge step towards implementation of comprehensive equality programs.

Deputy Mayor of Strasbourg stressed that France is currently taking all possible measures to ensure equal opportunities for employment and to implement the principles of gender equality in everyday life. For example, a city has to pay fines if not enough women hold management positions in public sector, and such cases already exist.

According to Christelle Wieder, one of the challenges today is the need to convince the local media to spread more information about emergency numbers so that women who suffer violence know whom to ask for help. "I am sure that the local media can have a real influence on fighting violence against women", she said.

According to Maryna Bardina, Member of the Parliament of Ukraine, the key challenge in the issue of gender equality for Ukraine is the awareness-raising of Ukrainians:

"Gender equality cannot be maintained without taking appropriate steps. It is impossible to talk about it without implementing policies, ensuring proper communication with each other, without media coverage of the issue. The key is to educate people, to broaden their worldview, to show the level of equality and the appropriate measures that are being taken in European countries, in countries that are really showing rapid growth. Information campaigns, education — this is probably the key for communities."

* The discussion was organized within and with the support of the Council of Europe projects "Supporting the transparency, inclusiveness and integrity of electoral practice in Ukraine", "Strengthening democracy and building trust at local level in Ukraine", "Enhancing decentralisation and public administration reform in Ukraine".