How Can Women Make the News? Social Media Training for female candidates in Armenia 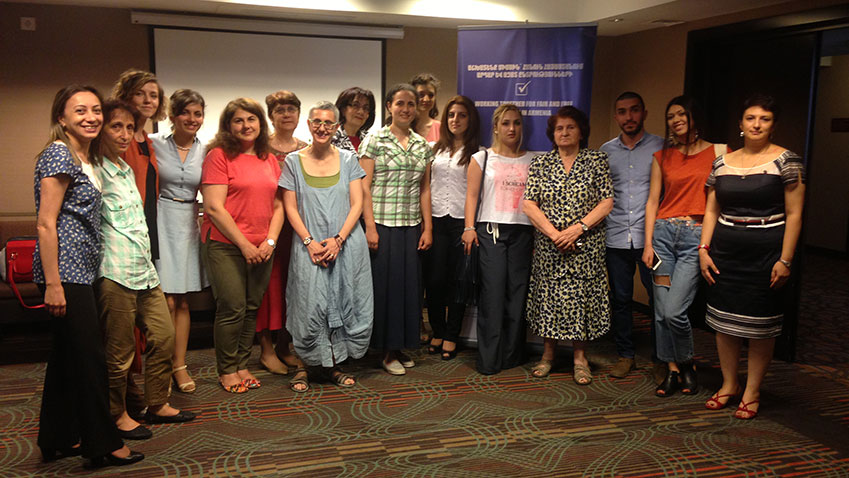 Group photo after the workshop

On 21 June Council of Europe conducted a workshop on Women in Politics and Representation Online, during which the participants reflected on how women are accessing and are represented in electronic media. Risks and added value of social media for female candidates were discussed and experiences shared.

Following the workshop, which can be seen as a stepping-stone for future initiatives, a group of 15 women participated in a two-day Training of Trainers on Understanding Social Media for Women Candidates on 22-23 June.  The Training covered the principles of social media, major social media sites, social media strategy, and measuring social media. Most of the participants highlighted the urgent need to use social media during both the electoral campaigns and after being elected, as an important tool with low costs and high outreach.

The training aimed at creating a pool of experts which will be able to enhance knowledge and skills on social media for female candidates to be used in 2016 local elections and to offer them individual coaching if requested.

Both the workshop and training, are part of the PCF Project “Long-term electoral assistance to the election related stakeholders of Armenia” and were facilitated by Valentina Pellizzer and Belma Kučukalić, experts on social media and political participation of women in Bosnia and Herzegovina.  Participants were representatives of local women’s organisations, international organisations, women activists and journalists.

What should the priorities be for women active in politics?

Lilit: One such priority is building capacities and developing professional skills of women who want to go in to politics. For example, they should be trained in public speaking, formulation of vision, goal and strategy, use of online platforms, etc. Another aspect is related to the economic independence of women since, as history shows, only economically active females can afford to undertake activities on the political arena.

Tamara: Social media can promote women's political participation. They thus become more noticeable. It is also possible to conduct effective campaigns to break the negative stereotypes associated with the lack of women as political actors.

Do you consider Internet as a tool to promote participation of women in politics?

Lilit: Internet can offer a solid basis for this purpose. The package can include online courses, organisation of online campaigns, networks of politically active women to share relevant experiences, recognition within a wider group of voters, etc.

Internet also makes the communication between the candidates and their constituencies faster, more efficient and more targeted. As such it already offers many opportunities. It is just an issue as to how female candidates or organisations supporting them will use them and to what extent they will make these opportunities serve their needs effectively.

Tamara: Internet serves as a platform, through which you can reach your constituencies and communicate with them. It is a two-way conversation. Our WomenNet.am website which has its own page also in social media sites (Facebook, Twitter, Google+) works exactly in that direction, trying to provide a platform for female political actors not only during the elections, but in general.

What are the main challenges in using Internet for a political campaign?

Lilit: Fake accounts that are out of control are to some extent challenges that can even have a reverse effect because of black PR. Its potential is huge, but it should be used with a high level of responsibility.

While speaking about Armenia, it should be noted that a large segment of marz (regional) population is still following up the election campaigns in other platforms: individual or group communication, TV, radio and printed media. In rural areas Internet is less used for objective and subjective reasons such as the availability of connection, ability to master the operational possibilities of the network, being overloaded with daily chores, etc.

Can you recall examples of using Internet to promote social issues or political debate in your country?

Lilit: I can give the example of the successful breastfeeding campaign that was widely discussed on Internet forums a few years ago. Today almost all issues are being discussed in online platforms. However, their success depends on the correct strategy of the campaigns, hard work, ability to choose the right audience and a number of other factors exercised by those implementing those campaigns.

Tamara: I can recall the examples of successful initiatives of social activism: the campaign against reducing the maternity pay, “Electric Yerevan”, “We won’t pay 100 drams for transportation”, etc. All of them originated in social media.

As a negative example I can mention the humiliation of female rights activists dealing with women’s rights issues within the “Anti-gender campaign”.

In your opinion, what should women active in politics and candidates focus on when using the Internet?

Lilit: I think that when starting to use the Internet for political campaigns these women should have a clearly formulated vision, goals, strategy and target audience.

What are the most important insights, conclusions or knowledge that you gained at this workshop?

Lilit: I want to state my main conclusion: in Armenia Internet is becoming a modern platform during the elections, particularly for women candidates.

Tamara: I understood that we need to start discussions of the social media to have a better understanding of opportunities that social media provide and the risks that they present. We all understood that women’s political participation is a requirement of democratic society and development.

Thank you for the interview.