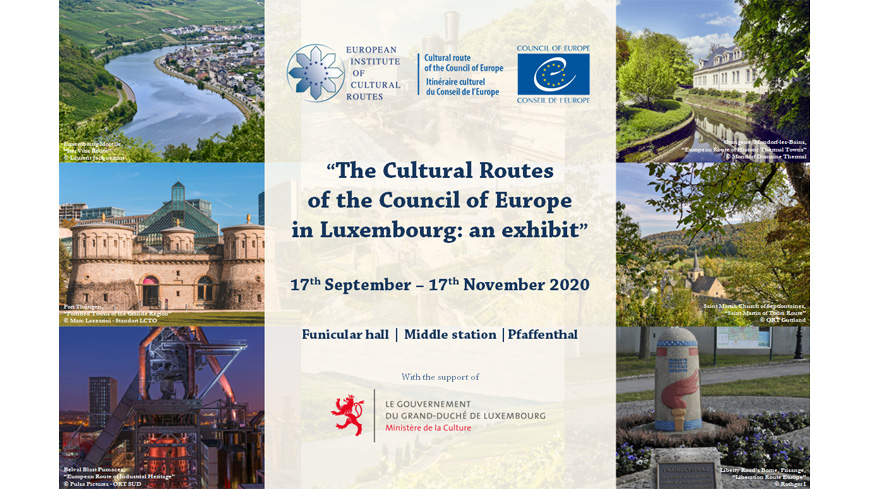 Between 25 September and 4 October 2020, the European Heritage Days took place across 50 countries, inviting European citizens to explore numerous monuments, sites and cultural events to get a better understanding of their cultural heritage and the importance of preserving it.

Displayed in the city of Luxembourg, the exhibition consists of large explanatory panels containing photos and texts on the program and on the various routes crossing the Grand Duchy. It introduces visitors and passing travellers to the Cultural Routes of the Council of Europe programme and highlights activities and sites along the certified Cultural Routescrossing Luxembourg. Through innovative activities, each Cultural Route promotes and enhances the discovery of European heritage, share similar purposes as the European Heritage Days.

Since the European Heritage Days were launched by the Council of Europe in 1985 and became a joint action of the Council of Europe and the European Union in 1999, the program attracts millions of citizens through various activities across Europe. They are held annually in September to highlight the richness and diversity of cultural heritage and to encourage its enhancement for present and future generations.

The Cultural Routes of the Council of Europe in Luxembourg exhibition will stay open to visitors until 17 November 2020 at the Funicular Hall of the Pfaffenthal Station (Luxembourg).

You will find further information and a digital version of the exhibition on our website.

The exhibition is organised with the support of the Ministry of Culture of the Grand Duchy of Luxembourg and the Luxembourg National Railway Company (CFL).