Eastern Partnership – Good Governance and the Fight against Corruption (EaP 1)

The Eastern Partnership (EaP) was launched by the EU at a Summit meeting with the Eastern partners on 7 May 2009 in Prague. It sets out an ambitious path for deeper relations with Armenia, Azerbaijan, Belarus, Georgia, Republic of Moldova and Ukraine, through a bilateral and a multilateral dimension. The EaP is based on mutual commitments to the rule of law, good governance, respect for human rights, and respect for the rights of minorities, the principles of market economy and sustainable development. The level of ambition of the EU's relationship with the Eastern partners will take into account the extent to which these values are reflected in national practices and policy implementation.

In its second meeting, the Eastern Partnership Platform 1 adopted its Work Programme for 2009-2011, which mainly focuses cooperation on the following areas: Democratic Governance; Improved Functioning of the Judiciary; Public Administration; Fight against Corruption; Flagship Initiative on Integrated Border Management; Flagship Initiative on Prevention, Preparedness and Response to natural and man-made disasters.

The Corruption component within the Eastern Partnership (EaP) Platform 1, as a major component stems from the realisation that there is a need to further enhance co-operation with Eastern partner countries that face similar challenges in complying with commitments originating from the Council of Europe’s membership and its standard-setting instruments. In view of this, in 2010 a series of “Bridge Activities” took place as a first step in contributing to look at the progress made so far of the reform processes in the six partner countries through a multilateral approach, and to facilitate the processes of the EaP’ Panel on Corruption as processes of bringing partner countries closer to the European standards. On 1 March 2011, following the "Bridge Activities" the EaP/Council of Europe Facility was launched in order to enhance good governance and strengthen the capacities of the public administration and criminal justice sector in order to effectively prevent and fight corruption in line with the Council of Europe Conventions and other international treaties. 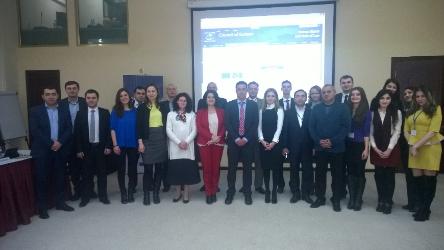 Regional Closing Conference (Activity 2.1): Share of peer countries on reforms and good practices during the implementation of the Project (Tbilisi, 12 December 2014)

The Project is organised two-day interactive trainings on “Political party and electoral campaign financing” in Yerevan, Republic of Armenia on 2-3 December 2014, and in Kyiv, Ukraine on 9-10 December 2014. The activities focused on strengthening capacities of oversight and auditing of political...

Training for the representatives of CSO (3.6): Reviewing and sharing of good practices on processing and verifying assets declarations (Yerevan, Armenia, 4-5 December 2014)

The activity entitled “Reviewing and sharing of good practices on processing and verifying assets declarations” is aimed at training up to 20 civil society representatives from Armenia on how to analyse declarations financially and on how to detect hidden income and expenditures. The training...