France: New brochure on the 30 Cultural Routes of the Council of Europe crossing the country 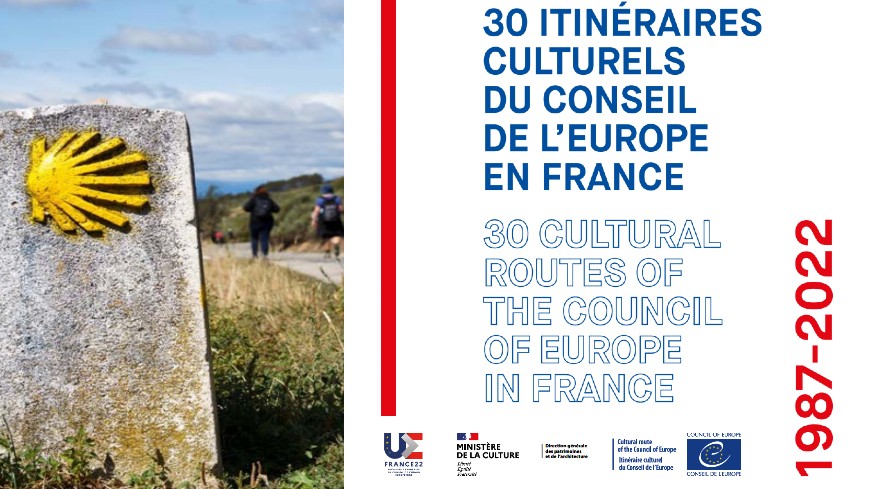 This joint publication between the Ministry of Culture of France and the Council of Europe has been prepared with the support of Mr. Bruno FAVEL, Head of the World Heritage Mission, Directorate General of Heritage and Architecture, and Ms. Orane PROISY, Head of the European Heritage Projects and Networks Department, World Heritage Mission - Directorate General for Heritage and Architecture. Mr. FAVEL and Ms. PROISY are the national representatives of France to the EPA on Cultural Routes.

The bilingual brochure, prefaced by Mr. Jean-François HÉBERT, Director General of Heritage and Architecture of the Ministry of Culture of France and by Mr. Stefano DOMINIONI, Executive Secretary of the Enlarged Partial Agreement on Cultural Routes of the Council of Europe (EPA) and Director of the European Institute of Cultural Routes (EICR), takes the form of fact sheets, offers detailed cartographic information, a historical, heritage and tourist description of each Cultural Route as well as information on activities and partner networks and is illustrated with numerous photographs.

Since the end of 2020, a working group, led by the Ministry of Culture of France in partnership with the Ministry of Europe and Foreign Affairs, has been working on the development of these Cultural Routes in order to make them a priority of the tourism policy in France. 2022 is an important year since the Annual Training Academy on cultural Routes was held in Fontainebleau, from May 31 to June 3, and benefited from the "French Presidency of the European Union" label, which helped to give the programme an even greater visibility.

Cultural Routes allow the discovery of places of heritage, tourist and cultural interest that are very diverse depending on the themes chosen: pilgrimage routes, historical or literary figures, tangible and intangible heritage, arts in all forms, traditions, etc. They also enable cooperation possibilities in many fields, ranging from culture to heritage, education or tourism, and bring together different types of actors: professionals, institutions, associations, ministries, tourist and economic actors, etc.

The 30 Cultural Routes in France encourage new forms of tourism (sustainable, intelligent tourism, etc.) and allow visitors to (re)discover the tangible and intangible, cultural and natural heritage throughout France and offer a wide range of equestrian, pedestrian, sporting, heritage and cultural activities to raise awareness among all publics, especially the young.

The brochure can be downloaded here.