The first Diversity Week to be organised in Georgia 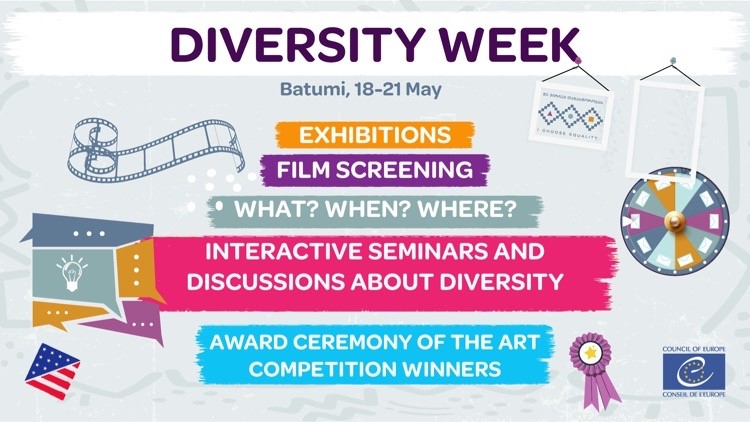 The Council of Europe Equality Ambassadors together with the American Corner in Batumi will organise the first Diversity Week on 18-21 May in Batumi, Georgia. The Diversity Week aims at raising awareness about the importance of equality and diversity and to promote tolerance by discussing the historical and cultural diversity in Batumi. It is celebrated around the World Day for Cultural Diversity for Dialogue and Development on 21 May and is implemented as part of the I Choose Equality campaign.

During the Diversity Week various awareness-raising events are planned. Some of the activities are given below:

19 May – Intellectual game “What, When, Where?”, where public and private school teams in Batumi will compete with each other. The aim of the game is to raise awareness about equality and cultural diversity among young people.

20 May – Photo exhibition  by famous photographer, Natela Grigalashvili will be held at the Batumi Library. The photos were taken in mountainous part of Adjara.

20 May - Film “Namme” by Zaza Khalvashi will be screened followed by the discussion involving the film crew.

21 May – Exhibition of artwork submitted for the art competition on equality will be held where the winners will be awarded with prizes. The art competition was announced within the initiative of the Council of Europe Ambassador for Equality in Adjara with the support of the I Choose Equality campaign. The aim of this competition was to identify the youth artwork on diversity and equality in order to raise awareness about equality and to increase their involvement in activism against any form of discrimination. The award will be delivered with a welcome speech by the representative of the Council of Europe Office in Georgia; Archin Chikovani, the Acting Mayor of Batumi; Sopiko Khalvashi, Deputy Mayor of Batumi; Maia Khajinashvili, Minister of Education, Culture and Sport of Ajara and Teona Beridze, Director of Batumi Public Library.

21 May – Interactive seminar on equality and diversity will be held online for Adjara school students. The seminar will be held by Equality Ambassador and will cover the topics, such as discrimination, equality, hate speech and cyberbullying.

Due to the COVID-19 pandemic situation, the number of participants is limited to 25 for each event.  In order to participate in the event, please make sure to register online in advance on the following link: https://bit.ly/3yj5fQS Please note that the interactive seminar on equality and diversity with school students will be held online without limiting the participant numbers.

You can learn more about the activities organised during Diversity Week on the I Choose Equality campaign’s Facebook page.

Diversity Week is implemented in the framework of the I Choose Equality Campaign which is part of  the co-operation Project “Fight against Discrimination, Hate Crimes and Hate Speech in Georgia”. The project is implemented under the Council of Europe’s Action Plan for Georgia 2020-2023 with the support of the Danish Neighbourhood Programme in Georgia (DANEP).