Webinar “500th anniversary of the coronation of Charles V: dreams and nightmares of an Empire” 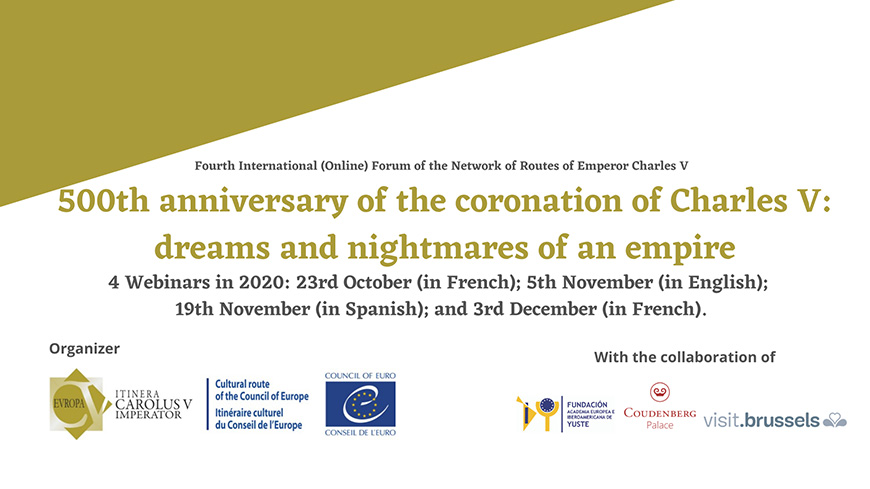 The Cooperation Network of the European Routes of Emperor Charles V planned a cycle of web seminars to commemorate the fifth centenary of Charles V’s coronation in Aachen (Germany). The first of four seminars was held online last Friday 23 October.

Mr. Miguel Ángel Martín Ramos, President of the Cooperation Network of the European Routes of Emperor Charles V, Mr. Stefano Dominioni, Executive Secretary of the Enlarged Partial Agreement on Cultural Routes of the Council of Europe (EPA) and Director of the European Institute of Cultural Routes, and Mr. Alain SERVANTIE, Coordinator of the Scientific Committee of the Network took, part in the opening of the webinar.

The event also counted the participation of Mr. Roel JACOBS, Historical Advisor to the City of Brussels, Mr. Juan-Carlos D’AMICO, Professor at the University of Caen, and Mr. Jonathan DUMONT, from the Austrian Academy of Sciences (Vienna), who dealt with different aspects related to the figure of Emperor Charles V and his coronation.

The video recording of the webinar is now available on the Network’s YouTube channel.

Upcoming editions will take place on 5 November (in English), 19 November (in Spanish) and 3 December (in French). Registration for the upcoming events is available here.

For more information about the webinar or the network, please visit the Website of the European Routes of Emperor Charles V.