Lebanon: The Minister of Tourism presents the “Wine Tourism Lebanon” Initiative with the participation of “Iter Vitis”, Cultural Route of the Council of Europe 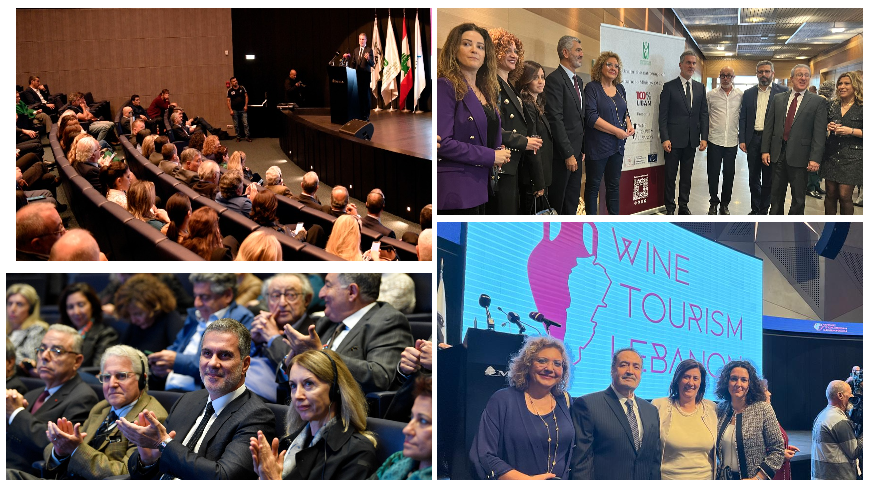 On 17th November, “Wine Tourism in Lebanon” was launched within the framework of the cooperation agreement between the Lebanese Ministry of Tourism and 100%Liban at Mea Training Conference Center, Beirut, Lebanon.

The event was co-organized by Lebanese Ministry of Tourism and 100%Liban, in collaboration with the main stakeholders in the public and private sectors, on both local and international levels affiliated with the Cultural Routes of the Council of Europe programme. initiative, set forward on the occasion of the recent accession of Lebanon to the Enlarged Partial Agreement of the Cultural Routes of Council of Europe (EPA), aims to implement a number of activities to reinforce Lebanon’s Wine Tourism Industry.

The event was opened by H. E. Minister Walid NASSAR, Ministry of Tourism of Lebanon with the participation of Ms. Elisabetta GIUDRINETTI, Deputy Director of Iter Vitis Cultural Route of the Council of Europe and Dr. Rachid CHAMOUN, Representative of Lebanon to the EPA Governing Board, and among the many speakers present at the event.

Mr. Stefano DOMINIONI, Executive Secretary of the of the Enlarged Partial Agreement on Cultural Routes (EPA) and Director, European Institute of Cultural Routes, addressed his support through a written intervention, presented by Mr. Chamoun. Mr DOMINIONI extended his congratulations to the Lebanese Ministry of Tourism for their initiative to promote the tangible and intangible heritage of wine and viticulture as one of the most ancient cultural heritages, spanning through millennia and across the entire Mediterranean region, Europe and beyond. He also expressed his gratitude for Lebanon’s active role in the work of the Governing Board of the Council of Europe EPA and University Network for Cultural Routes Studies and bade for a continued cooperation between Lebanon and the Cultural Routes of the Council of Europe.

Iter Vitis recently welcomed Lebanon among its members thorugh the Association for the Protection of Jabal Moussa (APJM), managing organization of Jabal Moussa UNESCO Biosphere Reserve. APJM, in collaboration with renowned archaeologists, recently surveyed an archaeological site that was interpreted as an “important pressing installation” for wine processing towards the Roman and Late Roman period, in the town of “Broqta” within Jabal Moussa Biosphere Reserve.

Mr. Rachid CHAMOUN, Director, LAU- Louis Cardahi Foundation, Advisor to the Lebanese Minister of Tourism for International Relations, is the representative of Lebanon to the EPA.