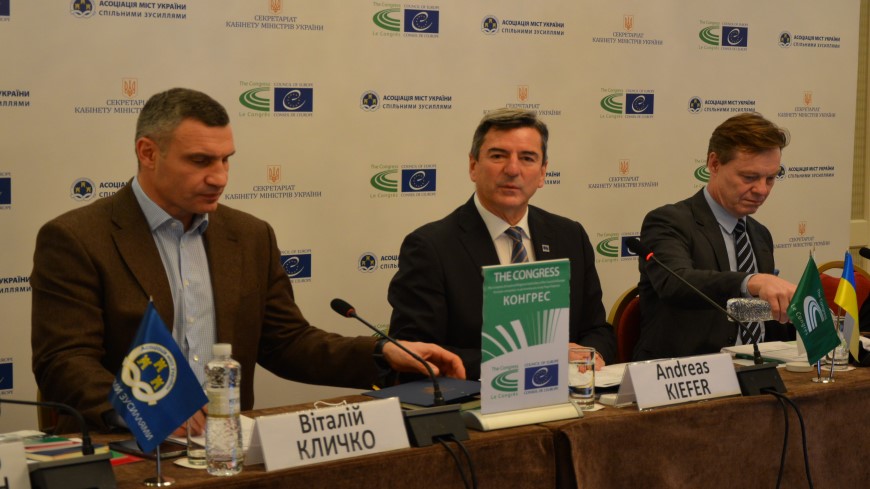 Secretary General of the Congress Andreas Kiefer, addressed in Kyiv, Ukrainian members of the “Platform for national-local dialogue on open government” during its second meeting, organised jointly by the Secretariat of the Cabinet of Ministers and the Association of Ukrainian Cities (AUC) on 16 December 2021.

He recognised the remarkable achievements in one year under the Roadmap for the promotion and development of open government and praised the commitment of the cities of Khmelnytskyi, Vinnytsia and Ternopil members of the local programme of the Open Government Partnership (OGP). “Today, we are witnessing that national and local authorities are uniting forces to implement the Ukrainian commitments and identify common priorities for a new Roadmap to be implemented with the Ministry of Youth and Sport and the Ministry of Digital Transformation who are joining this endeavour”, he stressed. “This is a direct result of the fruitful dialogue and relationship of trust between central government and local authorities”.

Vitali Klitschko, Chair of the AUC and Mayor of Kyiv reiterated the need for an “effective and regular dialogue and consultation mechanism between local and national levels of governance on all relevant issues, in view of voicing the interests and protecting the rights of local authorities.”

Mayors presented exemplary practices that brought institutional innovation to the public sector through transparency, accountability, participation, and co-creation with civil society. Responses to newly emerging and long-standing challenges, were discussed in an open dialogue between peer mayors, representatives of the AUC and central authorities, paving the way to a new joint Roadmap. Deputy Minister of Youth and Sport, Maryna Popatenko, reaffirmed the readiness of the Ministry to work with the AUC on meeting the objectives of the National Youth Strategy.

On this occasion, the city of Khmelnytskyi received the first prize of the OGP award for innovation and the City of Vinnytsia the third prize of this global award, thereby demonstrating the leadership and empowerment of Ukrainian cities in advancing European open government standards and localising Sustainable Development Goals.

During his visit, Congress Secretary General signed a Memorandum of Understanding with the Chair of the AUC, confirming that this Association remains the Congress’ main implementing partner in pursue of the irreversibility of reforms and the decentralisation of powers in Ukraine, in accordance with the principles European Charter of Local Self-Government.

In addition, Secretary General Kiefer met with national and local stakeholders to discuss their needs and contribution to the implementation of Congress projects in Ukraine, in particular under the Council of Europe Action Plan for Ukraine 2023-2026 currently under preparation. Meetings were held with the State Secretary of the Cabinet of Ministers Oleksandr Yarema, Deputy Minister of Youth and Sports Maryna Popatenko and Deputy Minister of Foreign Affairs Mykola Tochytskyi.

This hybrid event and meetings were organised within the project "Strengthening local democratic governance in Ukraine” implemented by the Congress of Local and Regional Authorities within the Council of Europe Action Plan for Ukraine 2018‑2022. The project aims to contribute to strengthening institutional consultation and dialogue between local and national authorities, and to build inclusive and accountable local authorities that respond to citizens needs and expectations, thus increase their trust in public institutions.