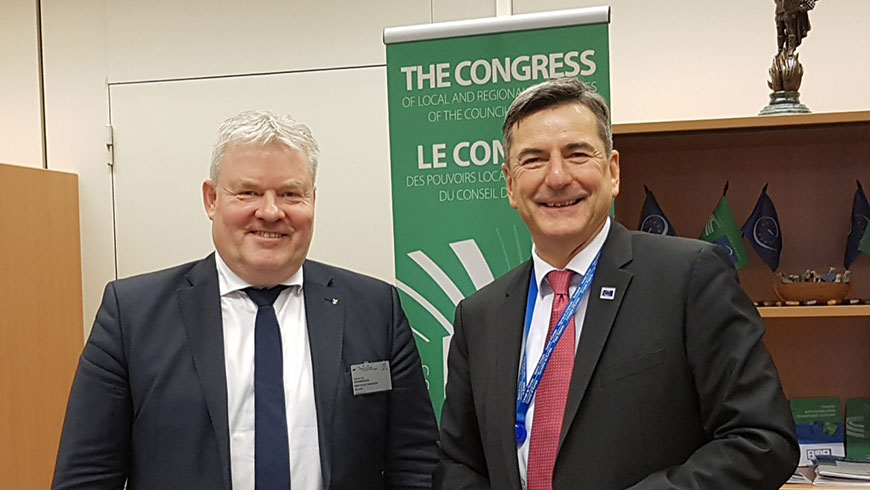 “Local authorities in Iceland contribute around 60 % of the implementation of the Sustainable Development Goals of Iceland as a whole. Therefore, the Icelandic government wants to strengthen the capacity of the municipalities to be able to deliver”, Mr Sigurður Ingi Jóhannsson, Minister for local government and transport of Iceland underlined in a meeting with Congress Secretary General Andreas Kiefer, in Strasbourg, on 9 Dec 2019.

The Minister also referred to the latest monitoring report of the Congress which contained very useful recommendations in further implementing the provisions of the European Charter of Local Self-Government in Iceland. The on-going reform includes a voluntary merger of municipalities while maintaining the role and democratic accountability of the local councillors and mayors to the population they represent.

In view of the upcoming Icelandic chairmanship of the Committee of Ministers in November 2022, Mr. Kiefer informed the Minister about the different options of contributions of the Congress to the preparation of the Icelandic priorities and the different possibilities to give impact and visibility of activities during the chairmanship, both in Strasbourg and Iceland.

Mr. Kiefer thanked the Icelandic government for having seconded an official to the Congress secretariat, which significantly improves the functioning of the Governance Committee secretariat.