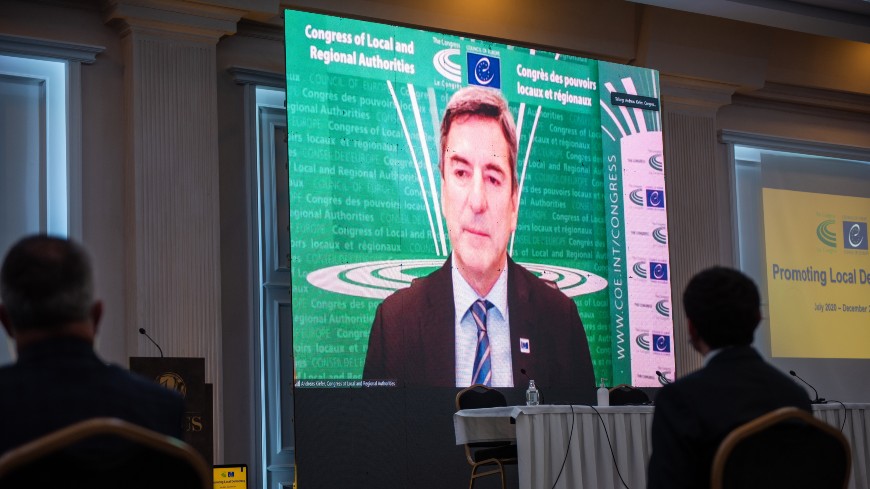 “Congress co-operation established the basis for the next necessary steps; after local elections and the commitment expressed by authorities the moment for the concrete follow-up is now.” stressed Congress Secretary General Andreas Kiefer at the Closing Conference of the project on “Promoting Local Democracy”, held in Pristina, on 15 December 2021. Implemented over the last year and a half by the Congress in co-operation with the Association of Kosovo Municipalities, the project contributed to improving local self-government and the quality of local democracy by strengthening multilevel dialogue and consolidating the capacities of local authorities on political integrity, public ethics and open government principles.

As the watchdog for the application of the European Charter of Local Self-Government, the Congress conducted a study on the alignment of the local self-government framework with European standards and supported preparation of an Action Plan to address the study’s findings and conclusions. Looking towards the future, the Secretary General added that as the level of governance closest to the citizens, municipalities are strategically placed to scale up innovation and best practices which can change the living conditions, foster inclusion and improve service delivery. “In the Congress, we are ready to pursue this co-operation and to work with local authorities on the implementation of the Action Plan. We also want to engage municipalities in promoting public ethics and open government at local level and increasing citizens’ involvement in decision making in order to prevent corruption and foster transparent, ethical and participatory governance,” he concluded.

Photo gallery of the event