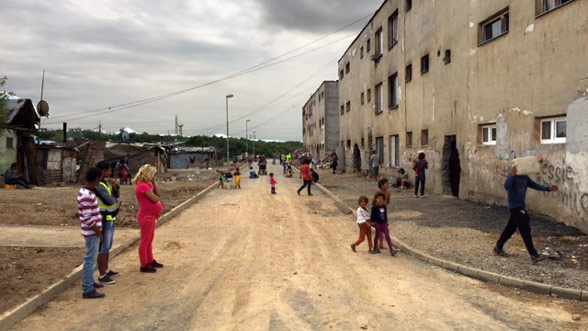 “Slovakia has to step up its efforts aimed at combating and eradicating discrimination in law and practice, and take effective measures to improve the protection of Roma, persons with disabilities and LGBTI persons,” said today Nils Muižnieks, Council of Europe Commissioner for Human Rights, releasing a report following his visit to Slovakia last June.

Although Slovakia’s anti-discrimination framework is comprehensive, it provides a differing degree of protection for various vulnerable social groups. It must be reformed to close all protection gaps. In this regard, the recent adoption of the first national human rights strategy is an important step towards framing a coherent and transversal approach. The Commissioner welcomes the efforts made to systematise the implementation and monitoring of human rights through the human rights strategy and stresses that its success is also linked to that of relevant sectorial action plans and their effective implementation notably at local level. In addition, he urges Slovakia to provide the Ombudsperson and the National Centre for Human Rights with adequate support and resources to effectively carry out their mandates.

Commissioner Muižnieks remains seriously concerned by the persistent manifestations of anti-Gypsyism and hate speech, and instances of excessive use of force by the police during raids in Roma settlements. It appears that the authorities underestimate the incidence and implications of racist hate crime, including racially motivated police violence, affecting Roma. More and resolute efforts are needed to condemn, effectively investigate and sanction such crimes.  The placement of Roma children in special schools, the spatial segregation of Roma, and their substandard housing situation must also be addressed as a matter of priority.  The recent legislative developments regularising informal dwellings should be reinforced by preventing evictions without the provision of adequate alternative accommodation. “I urge Slovakia to redouble its efforts aimed at protecting the human rights and social integration of Roma, in line with the Council of Europe standards. In this context I highly recommend the creation of an independent and effective complaints mechanism covering all law enforcement bodies to fight racially motivated police violence, and establish accountability for all human rights violations.”

As concerns persons with disabilities, Commissioner Muižnieks welcomes the on-going reform aimed at prohibiting the full legal incapacitation of persons with psychosocial and intellectual disabilities as of July 2016. The authorities should finalise this process and develop a flexible system of supported decision-making, based on individual consent and necessary judicial safeguards to ensure that persons placed under guardianship can challenge this measure.  At the same time, the Commissioner remains concerned about the slow deinstitutionalisation process and the practice of transforming traditional residential institutions into smaller housing units. “As a first step, the authorities should refrain from placing additional persons with disabilities in residential institutions.   Opening new - even if smaller – institutions should be avoided. Instead, resources must move to the development of individualised support services,” said the Commissioner, also highlighting the need to improve the access of children with physical or sensory disabilities to mainstream schools.

The strengthened policy and institutional framework notwithstanding, persistent anti-gay public discourse and hate speech are very worrying. They must be countered by effective measures, including extension of the provisions of domestic hate speech legislation to cover sexual orientation, gender identity, and sex characteristics. The provisions of the Criminal Code establishing hatred based on ethnicity, race, skin colour and sexual orientation as an aggravating circumstance should be also extended to cover transphobic hate crime. Law enforcement officials should be adequately equipped to identify and effectively investigate such incidents. “Hate crime, including hate speech, has deeply destructive effects not only on the victims, but also on society, thus requiring effective investigations and sanctioning by the authorities. This would send a strong signal that hate crime has no place in a democratic society.” Furthermore, in light of the recent case-law of the European Court of Human Rights, the Commissioner encourages Slovakia to provide legal recognition to same sex couples allowing them to address the practical problems related to the social reality in which they live.

Lastly, the Commissioner calls on the authorities to promote and fully respect the human rights of trans and intersex persons, including intersex children. Special attention should be paid to countering practices imposing medical interventions and non-marriage requirements for the official recognition of gender reassignment. In particular, Slovakia is called on to set up strong and explicit guarantees protecting intersex children from unnecessary surgical procedures aimed at assigning them a sex without their free and informed consent.