Lithuania: safeguards in asylum procedures and preventing pushbacks should be central to response to migration challenges 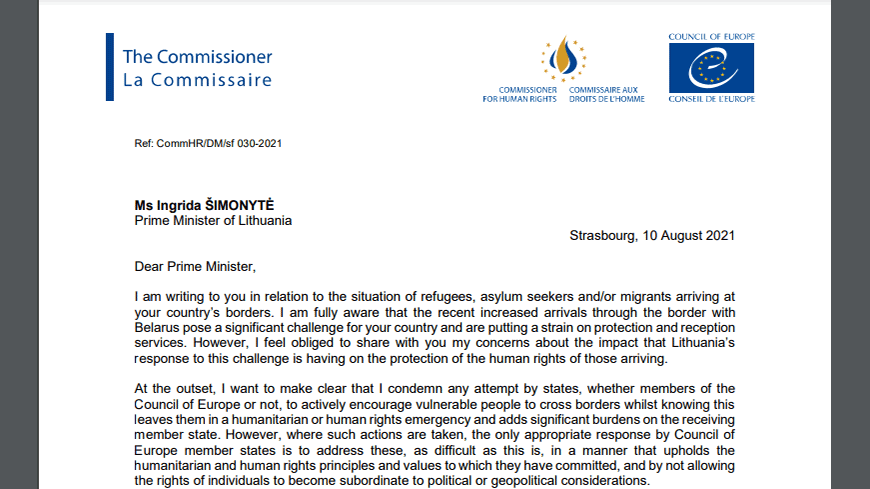 In a letter to the Prime Minister of Lithuania published today, the Council of Europe Commissioner for Human Rights, Dunja Mijatović, calls for the response to migration-related challenges to be fully compliant with the country’s human rights obligations, in particular by ensuring fair asylum procedures and preventing summary returns without adequate safeguards.

In her letter, the Commissioner acknowledges the significant challenges due to increased arrivals through the border with Belarus and condemns any attempt by states to actively encourage vulnerable people to cross borders while knowing this leaves them in a humanitarian or human rights emergency and adds burdens on the receiving state. She nevertheless stresses that reacting in a manner that upholds human rights and humanitarian values is “the only appropriate response”, including by “not allowing the rights of individuals to become subordinate to political or geopolitical considerations.”

In this context, the Commissioner expresses her concern about newly adopted amendments to the Law on the Legal Status of Aliens and accompanying legislation, including the removal, in emergency situations, of significant safeguards in the asylum procedure, which would pose a threat to upholding the principle of non-refoulement and the right to an effective remedy, as well as affecting the position of vulnerable persons. The Commissioner also notes that the way newly arrived asylum seekers and migrants are accommodated runs the risk of becoming de facto detention. Furthermore, she highlights reported instances of summary returns to Belarus of persons having attempted to enter Lithuania in an irregular manner.

In her letter, the Commissioner asks the Prime Minister how the government intends to ensure that the response to the challenging situation at Lithuania’s border meets its human rights obligations, including whether the amendments to the law will be revised to make the legislation fully compliant with those obligations. In particular, she also calls on the government to ensure that no returns take place to Belarus or other countries without their being accompanied by sufficient safeguards against refoulement or collective expulsions.