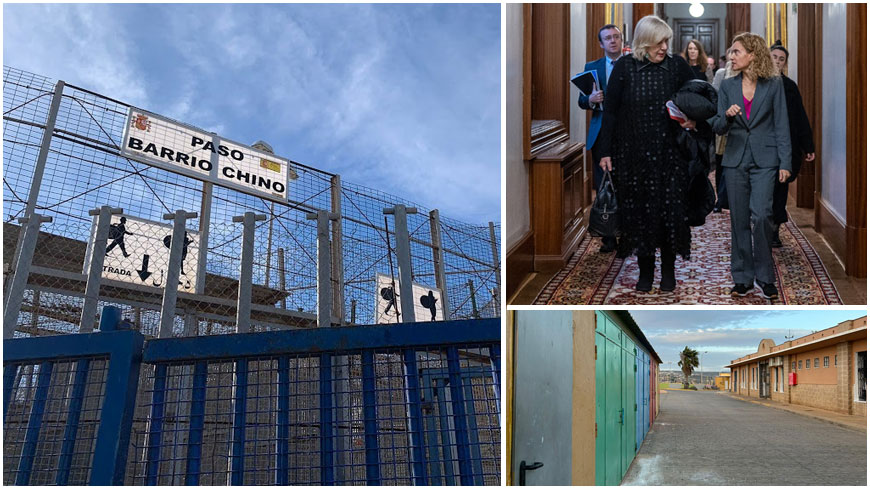 “While in Melilla, the Commissioner visited the border perimeter at Barrio Chino (left) and the centre La Purísima for unaccompanied migrant children (bottom right). While in Madrid, she met with the President of the Congress of Deputies, Ana Meritxell Batet Lamaña (top right).

“Spain has made significant efforts to advance the protection of social rights in recent years. Crucial legislative reforms, currently pending in Parliament, provide an opportunity to align Spanish legislation with international and European human rights standards, including in the field of the freedoms of expression and assembly, and should be adopted without delay. However, more remains to be done to ensure access to rights for the most vulnerable and to protect the rights of refugees, asylum seekers and migrants,” said Council of Europe Commissioner for Human Rights, Dunja Mijatović, today following a visit to Spain from 21 to 25 November.

While the Commissioner welcomes the ratification of the Revised European Social Charter and its collective complaints mechanism in 2021, she stressed that to address inequalities in access to social rights throughout Spain, the authorities should allocate resources transparently and sustainably and adopt common standards to ensure, in close co-operation with all competent authorities at central and local levels, that the specific needs of the most vulnerable are met. “Civil participation in decision making is crucial to design social policies in line with the needs of society. Civil society organisations should be proactively consulted and involved at all stages,” the Commissioner said.

“Housing should not be perceived as a commodity that is only available to some people. Access to adequate housing is a human right central to the full enjoyment of most other rights”, the Commissioner underscored. Long-standing issues, such as the very low social housing stock due to years of scarce public investment, high costs for renting or buying a home, forced evictions, and rising levels of homelessness must be addressed urgently. “The temporary suspension of evictions for vulnerable families launched in response to COVID-19 should be extended and aimed at the most destitute, until a more comprehensive and stable solution of alternative housing for all those in need can be found.” It is important that the housing bill, currently in Parliament and which addresses some of these concerns, be adopted as soon as possible.

More must be done to strengthen universal access to quality public healthcare for all throughout Spain. The Commissioner notes that regional differences are particularly notable in the provision of primary healthcare and specialised care, due among others to the predominance of private clinics in some regions. “Insufficient investment is allocated to primary health care. In many places, health personnel are exhausted and overwhelmed. Employment conditions are also of concern as the health sector relies mainly on short-term contracts”, the Commissioner emphasised. The high mortality in care homes during the COVID-19 crisis in some Autonomous Communities remains to be effectively investigated and addressed with the close involvement of the families of the victims. The Commissioner welcomes the authorities’ initiative to reform the care system for older persons. This should be based on an integrated provision of social and health care, which should ensure that older persons’ dignity, autonomy and independence are respected in full.

“Spain is taking important steps to uphold women’s and girls’ sexual and reproductive health and rights. It should ensure that inequalities in access between regions do not undermine such development,” the Commissioner said. A new bill facilitating access to abortion care, among others, for girls as of 16 years old is welcome. The bill would also strengthen comprehensive sexuality education in schools, expand access to modern contraception, and regulate different forms of obstetric violence in childbirth, putting women’s right to informed consent at its centre.

The Commissioner learned with concern that the 2015 Citizens’ Security Law continues to have a serious negative impact on the enjoyment of the freedoms of expression and assembly, in particular for human rights defenders and journalists, creating an overall chilling effect on society. The broad and imprecise wording of the Law gives a wide margin of discretion to law enforcement in interpreting it and imposing sanctions, thus allowing for its disproportionate and arbitrary application. “There is no real security without human rights. The best way to ensure citizens’ security is to protect and guarantee the human rights of all persons, including their freedoms of expression and assembly”, the Commissioner stressed, adding that the review of the 2015 Law on Citizens’ Safety should be used as an opportunity to bring it fully in line with European and international human rights standards. Furthermore, the Commissioner remains concerned about allegations of disproportionate use of force by law enforcement officials, inappropriate use of anti-riot weapons and the lack of clear and visible identification numbers, especially during demonstrations. All allegations of police abuse must be investigated and made fully accessible to judicial review. In addition, the overall accountability framework for law enforcement officials should be strengthened, and adequate oversight of the use of coercive powers and imposition of sanctions ensured.

As regards the human rights of refugees, asylum seekers and migrants, the Commissioner welcomes the measures adopted for the protection and reception of people fleeing the war in Ukraine. Steps have also been taken to improve the reception conditions in the Canary Islands and more funding has been allocated to provide for adequate protection and reception of unaccompanied migrant children. However, access to rights and protection varies significantly throughout the country and remains very challenging for many refugees and asylum seekers. Issues include long waiting periods to access the asylum procedure, delays in the identification of special vulnerabilities and obstacles in accessing social rights, including housing and health.

Based on her findings from her discussions in Madrid and in Melilla, the Commissioner concludes that there is no genuine and effective access to asylum at the border between Nador, in Morocco, and Melilla. “In practice, there seems to be no other way to enter Melilla and seek protection with the relevant authorities other than by swimming or jumping the fence, risking one’s life. This situation must be addressed comprehensively to make sure that those in need of protection can access the territory through legal and safe ways.” Furthermore, to ensure a human rights compliant approach, co-operation with UNHCR and relevant civil society organisations working on the protection of refugees and asylum seekers is essential.

As regards the tragic events in the context of the attempted crossings of the fence between Nador and Melilla on 24 June 2022, where at least 23 people died and many were injured, the Commissioner welcomed the opening of investigations by the Prosecutor General and the Spanish Ombudsman, stressing the importance of full and effective accountability of those responsible for any human rights violations that would be brought to light by these investigations. The Commissioner is also concerned about the preliminary conclusions of the Spanish Ombudsman, finding that on that date 470 people were returned to Morocco without any legal procedure being observed. “While all states have the right to control their borders, and to engage in co-operation with other states in doing so, this must be done in full compliance with all applicable international human rights standards”, said the Commissioner. Spain, like other Council of Europe member states, should not directly or indirectly contribute to human rights violations through measures taken to implement their migration co-operation with third countries. The situation at the borders between Morocco and Spain proves once again the urgent need to improve responsibility-sharing and solidarity measures between Council of Europe member states.

The Commissioner’s report on her visit to Spain is forthcoming.