The Project aimed to provide Council of Europe legal expertise, policy advice and support to the process of local self-government reform, including the preparation of the administrative-territorial reform, and to strengthen the capacities of local authorities. The first component (Support to Local Government Reform) aimed to bring Armenian legislation in the field of local self-government in line with European standards. The second component (Capacity Building of Local Authorities) targeted the institutional capacities and service-delivery means of local authorities. And finally the third component (Strengthening Leadership by Local Elected Representatives) aimed at improving leadership capacities of local elected representatives and generating a spirit of co-operation among Local Government Units.

The Programme, elaborated by the Council of Europe’s Centre of Expertise on Local Government Reform, has already been implemented successfully in Armenia in 2014, as well as in a number of European countries. The second round of the programme in Armenia was implemented as part of the capacity building components of the Council of Europe’s “Support to Consolidating Local Democracy in Armenia” project, funded by the Government of Denmark.

The Best Practice Programme (BPP) is aimed at identifying, publicly recognizing and disseminating best practices among local authorities in Armenia. For this year, the project’s Steering Committee has identified three main themes in which communities throughout Armenia may submit applications for a best practice status. Those are:

The detailed prospectus and application form of the Best Practice Programme were forwarded to all communities, while the prospectus is available at http://rm.coe.int/CoERMPublicCommonSearchServices/DisplayDCTMContent?documentId=090000168058f385 and the application form is also available at:   http://rm.coe.int/CoERMPublicCommonSearchServices/DisplayDCTMContent?documentId=090000168058f37e (Armenian only)

The Council of Europe organized meetings in Goris, Gavar, Gyumry, Vanadzor and Ijevan to present the Best Practice Programme to central, northern and southern communities of Armenia between 14-23 December. 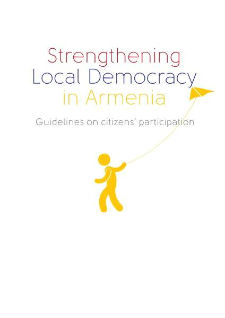 This film was produced for the Council of Europe's Best Practices Programme in Armenia in January 2015 and presents the Programme carried out throughout 2014 where 6 communities had won a contest to fly to Strasbourg for a site visit and learning experience.

“The Congress of Local and Regional Authorities of the Council of Europe filmed a documentary on citizen participation initiatives, which are implemented in the framework of the project “Support to consolidating local democracy in Armenia”. The objective of the Documentary film is to emphasize the importance for local authorities of providing opportunities to the citizens and the civil society to get involved in the decision making at local level, and to present the support given by the Congress to four target communities (Akhtala, Artik, Urtsadzor, and Vardenik). The Documentary is providing background information about the communities, the main issue that has been identified for discussion and decision, the level of civic engagement in the community, and the support received from the Congress.