This international cultural event, held for the first time in 1995 at the height of the siege of the Bosnian capital, seeks to support and further regional cinema and authors. It will run from 16 to 24 August 2013.

Short and full-length films by young directors from Eastern and Southern Europe are screened at the Festival, together with independent productions. The festival is a professional platform for the seventh art in a region where the Council of Europe is very active. The issues addressed by the contending works quite often tie in with the values upheld by the Organisation. Many are furthermore co-financed by the Council of Europe's Eurimages support fund for European cinema.

"Democracy and human rights start with us!"

Date:  22.08 pm (tbc)
Venue:  Festival Square
Public debate organized in cooperation with Poster for tomorrow on outstanding examples of Youth contribution to public life and debate  in Bosnia and Herzegovina. Special  focus on Youth's Internet use and on the Council of Europe's No Hate Speech Movement 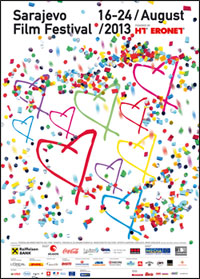