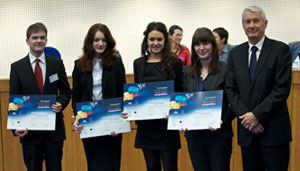 Strasbourg, 27.02.2013 - Students from Trinity College Dublin (Ireland) were declared winners of the first edition of the European Moot Court Competition in English on the European Convention of Human Rights, after beating a team from Essex University (United Kingdom) in the final round. The best orator prize was awarded to Joanna Kisielinska from Torun University (Poland) and the best written submissions prize to the team from Trinity College Dublin.

The Council of Europe hosts the final round of the first European Moot Court Competition in English on the European Convention on Human Rights. Sixteen university teams from thirteen countries (Czech Republic, Estonia, Finland, France, Georgia, Greece, Ireland, Poland, Romania, Serbia, Turkey, Ukraine, UK) have been selected following the written round of the competition. The final round is taking place at the European Court of Human Rights in Strasbourg.

The Moot Court Competition aims at giving law students, who represent future lawyers or judges, practical experience on the European Convention on Human Rights and its implementation.

The competition is organised by the European Law Students Association (ELSA) with the support of the Council of Europe.

Several countries from the Council of Europe have financially contributed to the organisation of this first competition in particular Ireland, Andorra and Poland.