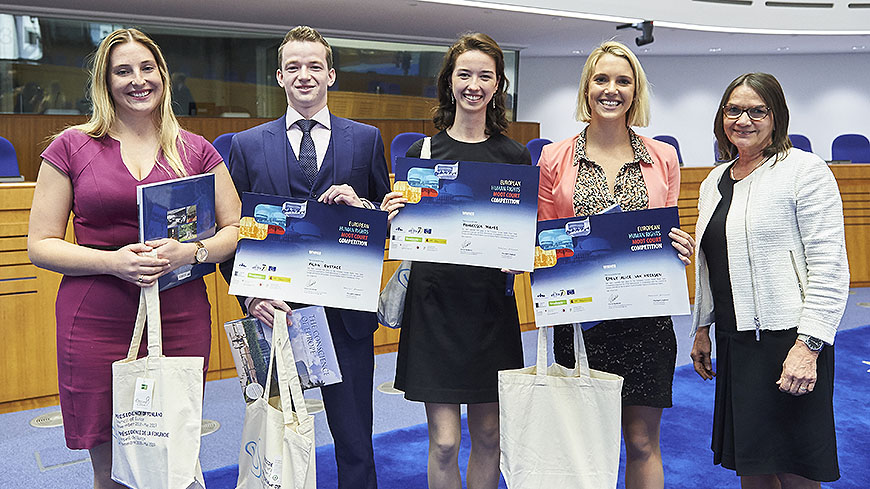 Students from University of Oxford (United Kingdom) were declared winners of the seventh edition of the European Moot Court Competition in English on the European Convention on Human Rights, after beating a team from the Sofia University "St. Kliment Ohridshi" (Bulgaria) in the final round.

The final round took place at the European Court of Human Rights in Strasbourg on the 18th of April 2019, with a bench of Judges comprised of prominent figures from the Court and several senior Council of Europe officials.

Twenty university teams from thirteen countries (Austria, Belgium, Bulgaria, Czech Republic, Georgia, Germany, Greece, Poland, Romania, Russia, the Netherlands, Ukraine, and the United Kingdom) have competed in a fictive case regarding cyber harassment and hate speech. The winning team is awarded a traineeship at the Court. In total, over a 100 teams have applied to be a part of this edition.

The EHRMCC aims at giving law students, who are future lawyers or judges, practical experience on the European Convention on Human Rights and its implementation.

The competition is organised by the European Law Students Association (ELSA) with the support of the Council of Europe. ELSA is an independent and non-profit organisation representing 54 000 students, located in around 350 universities in 44 European countries.

Several countries from the Council of Europe have financially contributed to the organisation of this sixth competition, in particular Finland, the current Chair of the Council of Europe Committee of Ministers, Ireland, Poland, Spain, Switzerland and Turkey as well as the City of Strasbourg.

The European Law Students' Association is an independent, non-profit, non-political association run by and for law students and young lawyers. ELSA comprises a membership of 40,000 students and recent graduates. ELSA operates primarily through its local groups, which are located at close to 300 universities throughout 43 countries in Europe.

Contributing to legal education and promoting human rights awareness are among the central aims of ELSA. The Council of Europe has had a partnership agreement with ELSA since 2008.