International Human Rights Day: Joint statement by the Chairman of the Committee of Ministers and the President of the Parliamentary Assembly 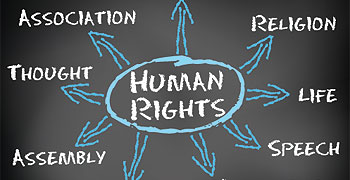 Strasbourg, 10.12.2012 - Gilbert Saboya Sunyé, Foreign Minister of the Principality of Andorra and Chairman of the Committee of Ministers, and Jean-Claude Mignon, President of the Parliamentary Assembly, issued the following statement on the occasion of International Human Rights Day:

"The Council of Europe works on a daily basis to protect human rights throughout Europe. Over the years, the Council has recorded many successes, first and foremost of which is the European Convention on Human Rights and its control mechanism. The European Court of Human Rights offers victims of human rights violations the assurance that they will be heard and that the Council of Europe will do its utmost to remedy and put an end to such violations.

These successes should not, however, let us forget that much still remains to be done and that this is a task which will need to be continued for generation to come.

This Day is therefore an opportunity for us to remember that the protection of human rights is something that is never fully achieved and that we must continue to do all we can to fight against violations of fundamental rights in Europe and elsewhere.

The Council of Europe's human rights protection standards are still too often ignored or violated. Journalists continue to be subject to censorship or threats; political opponents continue to be unjustly dragged before the courts and there are still many people who are victims of discrimination, ill-treatment or even torture. Moreover, there is a danger that the difficult economic situation in many countries will aggravate injustice and inequality if governments do not make every effort to remedy the harmful effects of the crisis which undermines the cohesion of our societies.

Human Rights Day should also prompt us to think of ways of preventing human rights violations. In this connection, we emphasise the importance of informing, training and raising the awareness of all leaders and citizens, and in particular young people, concerning the values of democracy and human rights. The Council of Europe remains committed to pursuing its action in this field."

In 2012, the spotlight is on the rights of all people — women, youth, minorities, persons with disabilities, indigenous people, the poor and marginalized — to make their voices heard in public life and be included in political decision-making.

These human rights — the rights to freedom of opinion and expression, to peaceful assembly and association, and to take part in government (articles 19, 20 and 21 of the Universal Declaration of Human Rights) have been at the centre of the historic changes in the Arab world over the past two years, in which millions have taken to the streets to demand change. In other parts of the world, the "99%" made their voices heard through the global Occupy movement protesting economic, political and social inequality.