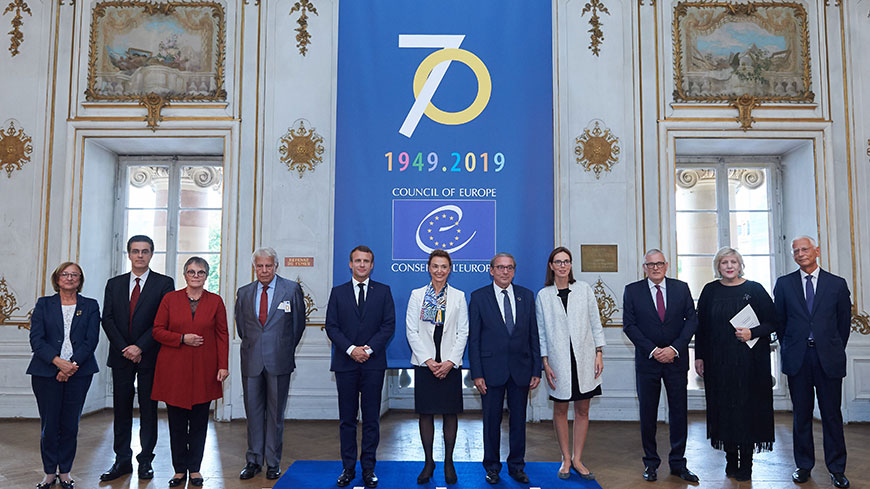 The Council of Europe has marked its 70th anniversary with a commemorative ceremony, held on Tuesday 1 October at the Opera House in Strasbourg city centre. The ceremony was opened by the Mayor of Strasbourg, Roland Ries, and featured interventions from former Spanish Prime Minister Felipe González, PACE President Liliane Maury Pasquier, and President of the European Court of Human Rights, Linos-Alexandre Sicilianos. Video messages were sent by Luca Parmitano, an astronaut on the International Space Station, and by the United Nations Secretary General Antonio Guterres. Musical interludes were provided by the Strasbourg Philharmonic Orchestra and by Duncan Laurence, the winner of the 2019 Eurovision Song Contest.

The highlight of the ceremony was an address by President Emmanuel Macron of France, who urged the assembled guests to face future challenges with optimism and courage, by drawing on a long tradition of European culture, democracy and innovation:

“These 70 years have been a miracle. Never before has something like this been achieved in Europe. But with these 70 years there also comes responsibility. I believe in this Europe of peoples, conscience, imagination and beauty. In this Europe of artists, free and happy citizens, activists and bearers of hope. This hope is our hope. Let's dare to dream, because this is us we’re talking about!”.

The newly-appointed Secretary General of the Council of Europe, Marija Pejčinović Burić, closed the ceremony with an address which struck an equally positive tone regarding the organisation’s future role:

“There are those who would undermine our values, our achievements and our unity. And it is right to draw attention to their actions and to join forces in order to oppose them. But as I look to the future, I am not afraid. The Council of Europe was designed to counter political extremism - and to stand firm when the rights of individuals are threatened. Our Court, our Committee of Ministers, our Parliamentary Assembly, all our various bodies and expertise are focused on accomplishing this task.”

Former Spanish Prime Minister Felipe González highlighted the crucial role that the Council of Europe continues to play in protecting the rights of citizens across the continent and expressed concern about the growing lack of respect for global rules by states,  which undermines the existence “of international, regional and national orders”. He underlined two pressing challenges: ensuring respect for the rule of law and dignifying new forms of work resulting from the ongoing technological revolution, so that income is redistributed in society in a more reasonable way.