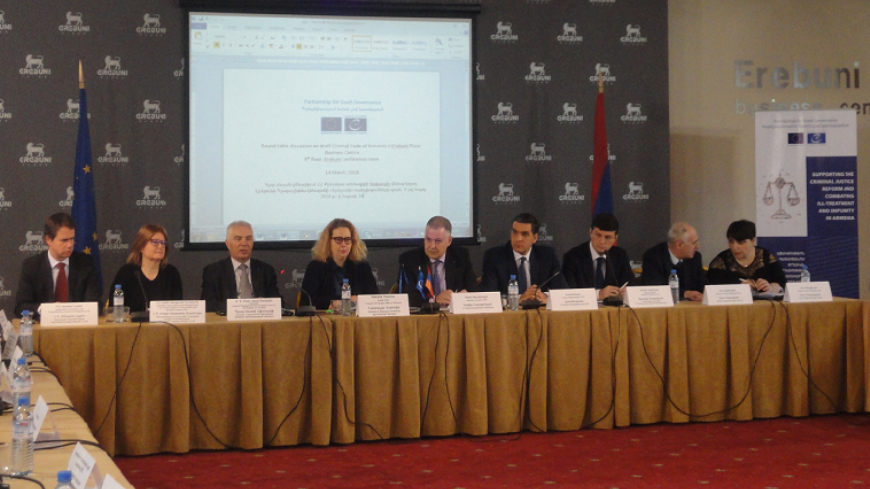 A Round table discussion on the draft Criminal Code of the Republic of Armenia was organised on 14 March where variety of stakeholders discussed issues and proposals on the draft Criminal Code. This was an important initiative, which gave an opportunity to the invitees and to the members of the working group tasked to draft the new Code to benefit from discussion with the Council of Europe experts. A significant number of issues of concern were raised and concrete recommendations were made to harmonise a number of controversial provisions of the draft Criminal Code with the case law of the European Court of Human Rights, so as to reduce the possibility of interpretation that may result in a violation of the rights prescribed by the European Convention on Human Rights.

The Round table discussion was organised within the scope of the Project on “Supporting the criminal justice reform and combating ill-treatment and impunity in Armenia”, funded through the European Union and Council of Europe Partnership for Good Governance.

Since 2015 the Project has been contributing to the reform of the criminal justice system in Armenia. In 2016 several consultation meetings were organised with the members of the working group and the Council of Europe experts. In 2017 the Project prepared an expertise of the draft Criminal Code of Armenia, aimed at bringing the Code in compliance with the European standards deriving from the European Convention on Human Rights and relevant case law of the European Court of Human Rights. This is notably important in the context of fight against torture, ill treatment and impunity. In 2018 the Project is continuing to support the criminal justice reform in Armenia through activities to facilitate the adoption and further implementation of the new criminal legislation.

The Round table discussion was chaired by Natalia Voutova, Head of the Council of Europe Office in Yerevan and was attended by Ambassador H.E. Piotr ̕Świtalski, Head of the European Union Delegation to Armenia, by Davit Harutyunyan, Minister of Justice of Armenia, Arman Tatoyan, Human Rights Defender of Armenia and other high level guests.