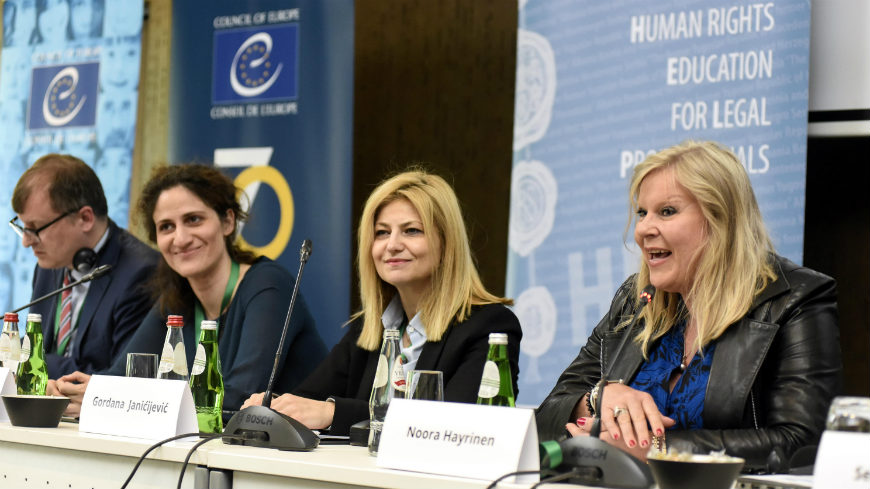 Strengthening capacities of judges, prosecutors, but also of civil servants working on the matters related to mutual legal assistance is necessary, but improvement in this area is already notable. This was one of the conclusions of the conference “International Co-operation in Criminal Matters: a human rights perspective”, held within the joint European Union/Council of Europe action “Supporting Effective Remedies and Mutual Legal Assistance”. The Conference marked the completion of the 2.5 year Action in which the component on mutual legal assistance provided support to Serbian legal professionals in discussing issues in this important aspect of the country’s international co-operation.

Gordana Janicijevic, Deputy Republic Prosecutor recognised the importance two Council of Europe programmes – Horizontal Facility for the Western Balkans and Turkey and Human Rights Education for Legal Professionals (HELP) – have had for the Public Prosecutor’s Office. “International co-operation in criminal matters, especially in the context of protection of human rights, is crucial precondition for a successful fight against crime by Serbian courts. This is why knowledge prosecutors gained through these activities is important and tailor-made trainings have significantly strengthened our capacities”, Ms Janicijevic said.

“Serbia ratified 25 Council of Europe conventions which deal with international co-operation in criminal matters, including the European Convention on the Mutual Legal Assistance in Criminal Matters, whose 60th anniversary we commemorate this year. However, commitment and capacity of national authorities to bring the standards embodied in these documents to life is crucial. Remarkable co-operation level achieved within this programme testifies that judicial and prosecutorial authorities in Serbia are aware of the existing shortcomings within their own ranks, but more importantly committed to work on enhancing their competencies,“ said Mr Sergey Dikman, programme co-ordinator in Human Rights National Implementation Division of the Council of Europe.

The Head of Political Section of the Delegation of the European Union to Serbia, Ms Noora Hayrinen, congratulated to prosecutors and deputy prosecutors on the completion of the HELP course on the international co-operation in the criminal matters. “Rule of law is vital to proper protection of citizens’ rights and that is why the European Union supports Serbia in the judicial reform process. The EU allocates 200 million euros per year to support Serbian efforts on the EU accession path and though reforms are costly, they are crucial for improvement of quality of life of Serbian citizens,” concluded Ms Hayrinen.

In the last three years, under the joint European Union/Council of Europe Horizontal Facility programme and action “Supporting Effective Remedies and Mutual Legal Assistance”, the Council of Europe has worked with Republic Public Prosecutor’s Office and Judicial Academy on creating and implementing the HELP online course on International Co-operation in Criminal Matters and strengthening capacities of prosecutors on issues related to the mutual legal assistance. 15 prosecutorial trainees and 53 prosecutors/deputy prosecutors completed the course that was adapted to the Serbian legal order and to the needs of the prosecutors in Serbia.