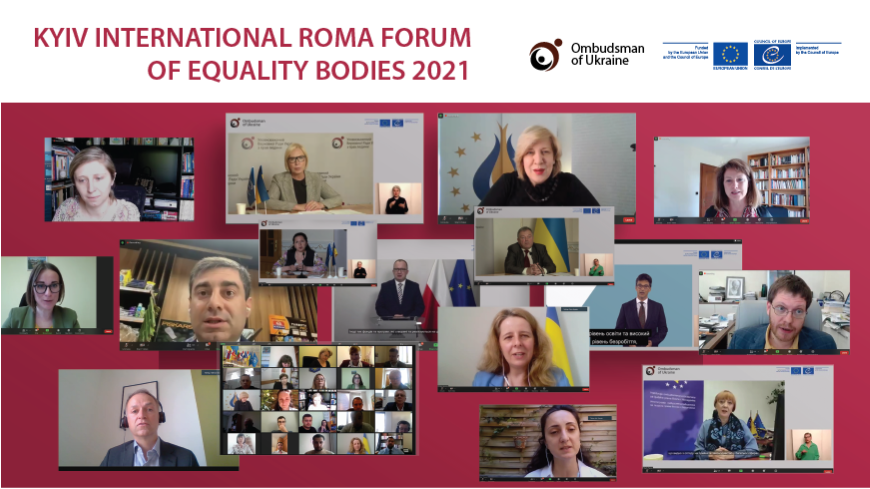 Upon the initiative of the Ukraine Ombudsperson office, the Anti-discrimination Department co-organised the ‘Kiev International Forum of Equality Bodies on Roma Inclusion’, on 27 May 2021.

The Forum gathered over 140 participants, from over 20 independent human rights institutions from across Europe and provided space where over 20 good practices were shared on the role of the Ombudsoffices / Equality bodies in fighting for Roma inclusion in society. The first edition of the Forum focused also on the consequences of the pandemic on Roma communities, as the COVID crisis increased the stigmatisation of vulnerable groups in Europe – including for the Roma population. Two thematic sessions were included in the programme, one on inclusive public policies for Roma communities and one on combating hate speech affecting the Roma communities.

The meeting was addressed by the Council of Europe Human Rights Commissioner, who underlined the gravity of racism and discrimination against Roma communities and reaffirmed the key role of human rights institutions in combating this phenomenon.
Ms Denisova, Parliament Commissioner for Human Rights of Ukraine, proposed to the meeting guests to have a stable platform of coordination on Roma inclusion among Ombudsoffices in the future.
A Forum resolution was approved by participants, with calls for reinforcing the role of Ombudsoffices in protection the rights of Roma communities and advocating to other public institutions to ensure Roma inclusion.

The Council of Europe, through its standards, its Strategic Action Plan for Roma and Traveller Inclusion, and its monitoring bodies such as the European Commission against Racism and Intolerance and the AC/FCNM, is a privileged partner of the equality bodies across Europe. For example, the general policy recommendation (GPR) of the European Commission against Racism and Intolerance (ECRI) number 2 encourages equality bodies to address, in the remit of respective mandates, all forms of discrimination, including based on ethnic origins. ECRI GPR number 13, on combating antigypsyism and discrimination against Roma, calls for a multidisciplinary approach to issues concerning Roma; enhancing mutual trust, and combat antigypsism in the field of education.

The Forum is a follow up activity of the special report of the Ukrainian Parliament Commissioner for Human Rights “Impact of the COVID-19 pandemic to Roma community in Ukraine” that was prepared in cooperation with the Council of Europe Project "Protecting national minorities, including Roma, and minority languages in Ukraine" in 2020.

The event was supported by the EU-COE regional project “Strengthening access to justice through non-judiciary redress mechanisms for victims of discrimination, hate crime and hate speech in Eastern Partnership countries”, funded by the European Union and the Council of Europe and implemented by the Council of Europe, and the Action Plan project “Strengthening protection of national minorities, including Roma and minority languages in Ukraine”.