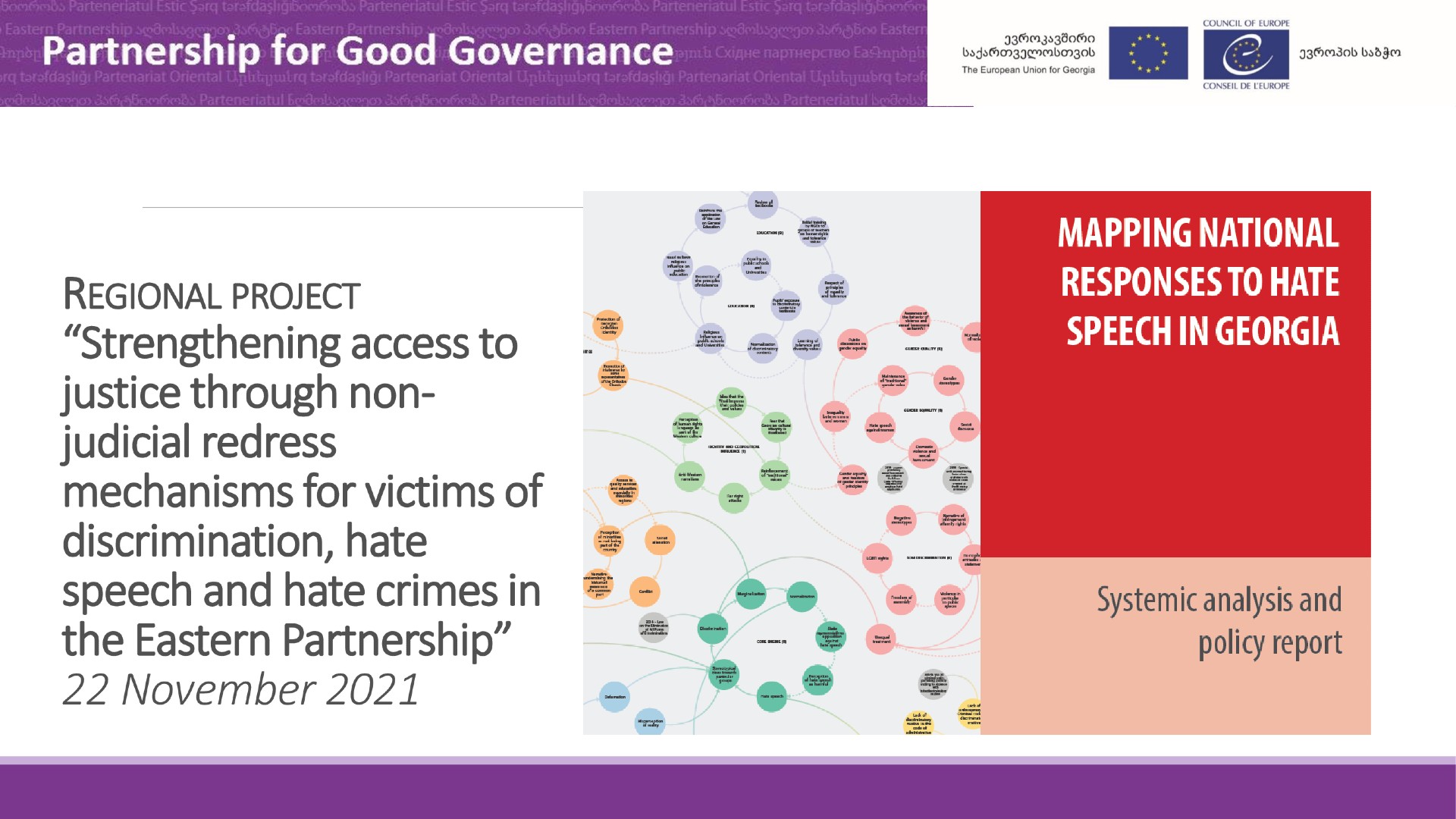 “To address hate speech in Georgia, the government, media and civil society must unify their efforts. While planning and implementing activities to combat hate speech, it is essential to respect the fundamental right to freedom of expression and opinion and prevent the misuse of the restrictions”

The report on the systemic mapping of national responses to hate speech in Georgia was launched during an online event on Monday 22 November.

The report was compiled through an inclusive and innovative methodology, with the contribution of state institutions, civil society and media. It contains an overview of the elements and dynamics of hate speech in the country and recommendations to all stakeholders on how to address it. It refers to the Council of Europe’s European Commission against Racism and Intolerance (ECRI) General Policy Recommendation No. 15 on combating hate speech which stresses the importance of a comprehensive approach to tackle hate speech and the need to reconcile the right to freedom of expression with other rights, notably those of groups targeted by hate speech.

In her opening remarks, Irena Guidikova, Head of Division, Inclusion and Anti-Discrimination Programmes of the Council of Europe stressed the importance of effective co-ordination to counter hate speech and invited “all participants to make good use of the map provided by the report and the compass offered in its recommendations to embark in a collective journey to address hate speech.”

Evija Kotan, Deputy Head of Political, Press and Information Section, EU Delegation to Georgia said:“The EU will continue its assistance and support of coordinated response by all relevant actors to better understand discrimination and hate speech as well as hate crimes they instigate, and devise targeted, suitable interventions to combat these persisting challenges”.

Ekaterine Skhiladze, Deputy Public Defender of Georgia, noted that “this report will be used by the Public Defender Office to support the reasoning of its decisions and its awareness-raising campaigns; because it’s not always easy to persuade the society that, for example, the use of sexist discourse leads to discrimination, domestic violence and sexual harassment”.

Main challenges ahead and priority areas for intervention were the focus of the panel discussion with representatives of the Ministry of Education, Public Defender Office, Georgian Democracy Initiative, Media Development Foundation and Charter of Journalistic Ethics. Education, raising awareness of citizens, but also of institutions and professionals were clearly identified among key priorities. The importance of effective co-ordination to build a national strategy against hate speech was also highlighted.

The Council of Europe will continue working together with national stakeholders to support an effective and comprehensive response to hate speech.