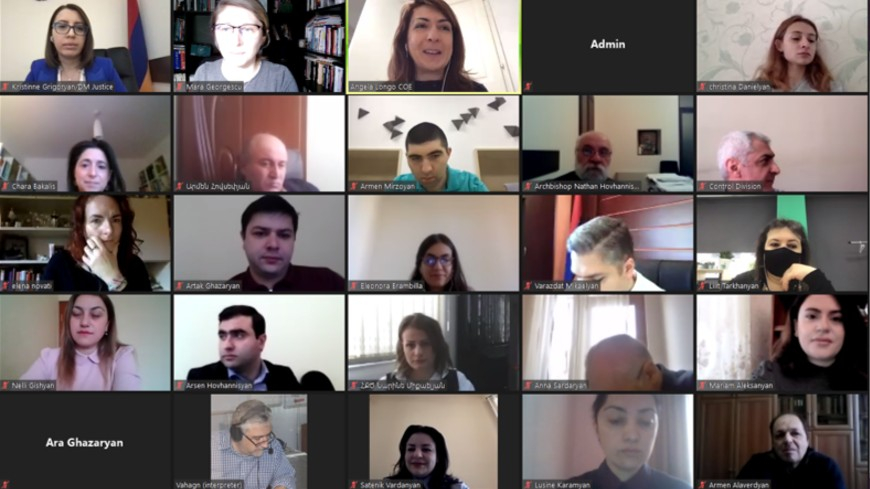 Engaging national stakeholders in a debate over how to best combat hate speech is one of the key project actions in Armenia. With this purpose, on 8 and 9 April 2021, the Council of Europe organised two events on hate speech in Armenia.

First of all, on 8 April morning, over 70 participants attended the event “Hate speech: concept, standards and measures to combat it”, during which participants learnt more about the study carried out by the Council of Europe on this topic in 2020. Participants engaged in a lively discussion, and inputs from the Ministry of Justice of the Republic of Armenia and from the Human Rights Defender supported the need to prioritise action against this topic, from the prevention to the legal instruments.

On 8 April afternoon and 9 April morning, over 40 participants from public institutions, civil society organisations, media organisation and religious organisations in Armenia attended online training courses on Council of Europe standards to combat hate speech. The course aimed to increase participants’ understanding of hate speech, its forms, its causes and consequences. Participants also learnt more about the definitions and approaches proposed by the European Commission against Racism and Intolerance (ECRI) General Policy recommendation No. 15 on combatting hate speech and the 2nd Vice Chair of ECRI, Michael Farrell (member for Ireland) presented this Recommendation and how it underlines the importance of a multi-stakeholder approach to combat hate speech.

During these events, the Council of Europe launched a public policy research process, a systemic mapping of national responses to hate speech in Armenia. The mapping process will use systemic design to encompass all possible responses as outlined in ECRI GPR No. 15, for example self-regulatory procedures, public condemnation, victim support and educational responses. By breaking down a system into its component pieces and studying how those component parts work and interact to accomplish their purpose will help participants identify gaps, challenges, and propose new actions and responses.

This activity is part of the “Strengthening access to justice through non-judicial redress mechanisms for victims of discrimination, hate crime and hate speech in the Eastern Partnership" project funded by the European Union and the Council of Europe and implemented by the Council of Europe.