Implementing the European Convention on Human Rights: Domestic courts crucial in protecting human rights and freedoms on the national level 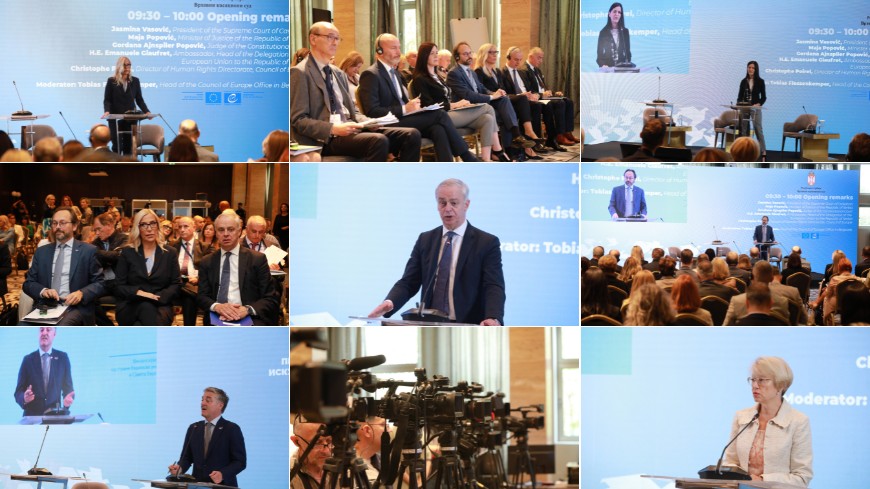 Domestic judicial authorities are at the heart of protecting the rights and freedoms of people under their jurisdiction. The effective implementation of the European Convention on Human Rights and European Court’s judgments requires continuous efforts by national authorities, as this complex endeavour involves multiple institutions and actors – at the executive, legislative and judicial levels – and calls for continuous co-operation and co-ordination at the national, regional and European level.

This was the main message conveyed during the first day of the conference on the “Implementation of the European Convention on Human Rights – practices and challenges of the courts in Central and South-East Europe”, heldon 15-16 September in Belgrade by the Supreme Court of Cassation and the joint European Union/Council of Europe action entitled “Strengthening the effective legal remedies to human rights violations in Serbia”.

In his opening remarks, Christophe Poirel, Director of Human Rights at the Council of Europe, reminded participants that human rights are not values that are secured once and for all. “They must be preserved permanently and applied consistently every single day. In this regard, the European Court of Human Rights cannot be solely responsible for enforcing human rights standards across Europe. It is at national level, with you, that the most significant powers of human rights protection lie,” said Poirel.

Jasmina Vasović, President of the Supreme Court of Cassation, emphasised the role of national judges in implementing the Convention. “As the Convention system resides on the principle of subsidiarity, is of great importance that national judges enable the effective protection of Convention rights before the national courts. That is also why the dialogue implemented through co-operation within the Superior Courts Network is important,” said Vasović. She added that the conference is an opportunity for judges to exchange views on various issues relevant to the effective implementation of the Convention.

Maja Popović, Minister of Justice of the Republic of Serbia pointed out that this conference is particularly important because the protection of human rights is an imperative for every society that strives towards democracy, and the Constitution of the Republic of Serbia rests firmly on that premise. "I believe that today's conference will provide a basis for discussion on the impact of the jurisprudence of the European Court of Human Rights on the jurisprudence of national courts, as well as the challenges that domestic courts have when applying the standards of the European Court of Human Rights," said Minister Popović.

"I want to express my gratitude for the support that the European Union and the Council of Europe provide to the Republic of Serbia in the effective implementation of the Convention and thus contribute to the realisation of the activities defined by the Action Plan for Chapter 23," added the Minister of Justice.

Ambassador H.E. Emanuele Giaufret, Head of the Delegation of the European Union to the Republic of Serbia highlighted that for decades the Convention of Human Rights had been an anchor of human rights protection. “The Court, through its case-law, contributed to ensure that the Convention is a living document responding to the need to protect human right as society evolves. In global erosion of democratic principles this guidance is becoming even more valuable. At this very moment, close by, there is one large group of citizens advocating and fighting for their basic rights - to love and assemble freely. For the Convention, or any other system of human rights protection to succeed it is necessary to rely on efficient and impartial judiciary - primary guardian of rights and freedoms of people”, said Ambassador Giaufret.

He reiterated the importance of constitutional reforms and welcomed preparatory work for its implementation as five laws have been prepared in co-operation with the Venice Commission, adding that all key stakeholders need to be actively engaged, both in institutional and civil sector.

“The EU will remain to provide both expert and financial assistance for Serbia to progress in further reforms, strengthening independent, professional and accountable justice system for all”, concluded Ambassador Giaufret.

The conference provided a platform for discussion among judicial stakeholders on the effects of the case-law of the European Court of Human Rights (ECtHR) on the judicial practices of domestic courts, challenges and good practices in the implementation of ECtHR case-law, in particular in the domains of freedom of expression, the right to an impartial tribunal, the acquisition and deprivation of property rights, the fight against organised crime and access to courts and highest courts. The conference brings judges of the European Court of Human Rights together with presidents and judges from the highest courts from Central and South-East Europe (Bosnia and Herzegovina, Croatia, Montenegro, North Macedonia, Slovenia and Serbia).

The conference was organised within the action “Strengthening the effective legal remedies to human rights violations in Serbia”, part of the joint European Union and Council of Europe programme “Horizontal Facility for the Western Balkans and Turkey 2019-2022”, implemented by the Council of Europe.